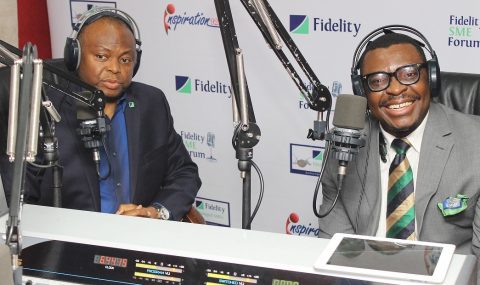 The bank’s Chief Executive Officer, Mr. Nnamdi Okonkwo, said this on the Fidelity SME Forum monitored on Inspiration FM, which he anchored yesterday. The programme had popular comedian, Atunyota Akporobomerere, whose stage name is Ali Baba.

Okonkwo said when Fidelity Bank decided to play in the SME, management of the bank sat down and crafted a strategy about how to add value to the sector.

“For about seven years now, our strategy has been to focus on segments. A lot of people get entertained by musicians, they see people in the movie industry and get entertained. But we as bankers, we look at the business components of what people do and how to transform those talents into business.

“If you recall, in the past, comedy was like people wearing funny clothes, dressed like clowns and to make people laugh. But somewhere along the line, certain people like Ali Baba began to refine things and people realised that you can actually make a living out of comedy. The same thing with music and the movies. In the past, a lot of people did not see the business side of things.

“So, we are here to help this industry identify the business side of their industry and teach them basic business principles such as access to finance, access to business, and how you can even begin to diversify beyond entertainment,” he added.

According to Okonkwo, the bank has an SME division called the Managed SMEs unit which is saddled with the task of ensuring that operators in the SME segment get the desired support.

He revealed that the end of the sixth week of the ongoing SME Forum series on the entertainment industry, Fidelity Bank would thereafter run a free seminar for operators in the industry.

“A lot of people are clueless about finance. Indeed, that is why the CBN takes financial literacy seriously. It is in line with this that Fidelity Bank tries to help these people the money and business part of what they do.

We have seen superstars go down to penury, from being millionaires and billionaires and we don’t want that to happen to our entertainment industry players. So, that seminar would look at people who succeeded in the past and suddenly became poor because of management of their finances. Whether you are an Ali Baba, a Don Jazzy, P-Square, etc, what matters is at the end of the day is how you are going to sustain your brand,” he added.

On his part, while speaking about how he has been able to sustain his brand profile, Akporobomerere said: “First you must understand that showbiz is dynamic and you are as good as your last joke. So, like in every other kind of business, if you rely on old landmarks, you will lose the footprints of the future.