FIFA Under-17: England, Spain Through to Final 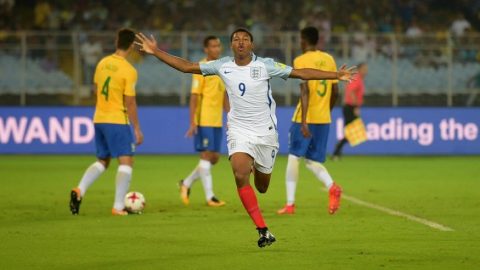 England striker, Rhian Brewster Celebrates one of his goals

(AFRICAN EXAMINER) – With a hat-trick from the Liverpool striker Rhian Brewster, making the match to end in 3-1 over Brazil, England have made it to the Under-17 World Cup final.

Brewster took his chances clinically and was assisted by the impressive Manchester City midfielder Phil Foden as the Young Lions look to follow the U20s, who won their World Cup in June.

In the other match, Spain beat young Malians in the same margin to make it to the final coming up on Saturday, Oct. 28, 2017.

Brazil and Mali will play the third place match on Saturday, Oct. 28, 2017