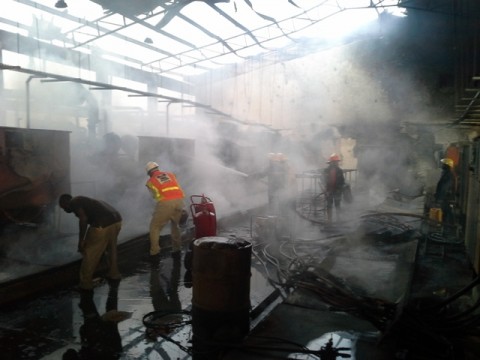 Officials of the Lagos State Fire Services battled the fire for over three hours before it was extinguished. The fire began around 6:30 pm on Tuesday. 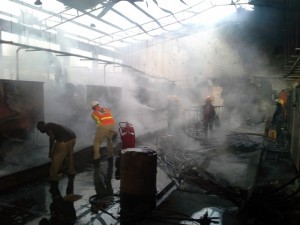 scene of the fire

The inferno burnt the entire generator room, with 14 giant generators inside the house, which were all burnt up.

The Director of the Lagos State Fire Services, Mr. Rasak Fadipe said “The Christ Embassy outbreak of fire involved the generator room with 14 mighty diesel driven generators, a lot of diesel and PMS storage tanks, the power house with many armoured cables and many big AC compressor machines.

According to him, fire service officials battle very hard before they could put out the fire which raged on for about three hours, adding that “we didn’t allow the tanks to burst. And we also prevented the fire from spreading to the air conditioner house.”

“When my men arrived the scene, the church restricted them as they wanted to take over the affairs of putting off the fire. I had four fire trucks on ground from Ilupeju, Isolo, Ikeja and Alausa with 10,000 tones of water each and 18 factory-fitted generating sets to combat the inferno,” he stated.

The General Manager of the Lagos State Emergency Management Agency (LASEMA), Dr. Femi Oke Osanyintolu said there was no casualty, but noted that one of the fire service men sustained injury while the church lost a number of its generating sets and properties.

In the last six days fire has gutted about 12 houses in Lagos, Southwest Nigeria as hoodlums attacked and vandalise a truck belonging to the Lagos State Fire Service while fighting fire

Fire servicemen and other emergency responders have had to battle series of inferno in the Lagos metropolis between last Thursday and yesterday as fire razes buildings, destroying valuables worth millions of naira.

On Friday, fire gutted the office of the Muri International Television, MiTV, with fire officers battling to quell the fire.

According to the General Manager, Lagos State Emergency Management Agency, LASEMA, Dr. Femi Oke-Osanyintolu, emergency responders were immediately put in place and the fire was put out.

“There were no morbidities or mortality as all stakeholders in the management of emergency were on ground to fight the fire,” he said. The same day, fire gutted the Iyana Ipaja Market, with 10 shops burnt in the inferno before it was put out by fire fighters from the Lagos State Government.

“LASEMA, and the Lagos State Fire Services have put out the fire. There were no casualties recorded, however, properties were destroyed,” said Osanyintolu.

On Saturday, Director, Lagos Fire Service, Fadipe disclosed that the agency received seven emergency calls that day out of which fire destroyed 12 rooms at Idimu, 10 rooms at Badia and one room at Osoba Street, Iyana Ipaja.

On Sunday, properties worth several millions were destroyed during fire outbreaks that affected a section of Elephant House, Secretariat, Alausa in Lagos. It was gathered that the fire outbreak was due to electric surge that started from a split Air conditional in one of the offices on fifth floor of the building as the fire razed some offices on the fifth floor. The inferno started around 7:45 am.

Fadipe blamed the cause of the fire on electric surge from one of the split air conditioner in the section, saying “we received the distress call at 8:10 am this morning (yesterday) from one of the officers who ran to our Alausa fire station.”