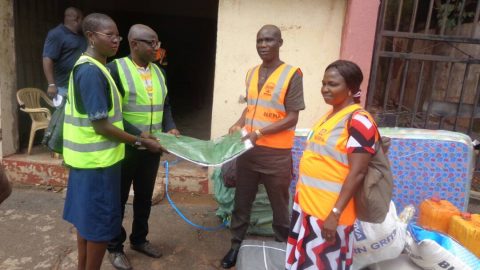 The materials included different quantities of building materials, among which is 500 pieces of roofing sheets 500 pieces of blankets, foam mattresses, clothes, mosquito nets  and bags of salt.

Also handed over to the State were different bags of food items, such as bags of rice, beans, garri, palm and groundnut oil, toiletries, wears for men, women, children, mosquito nets as well as sewing machines.

Handing over the 26 different items to the state government in Enugu, Director General of NEMA, Engineer Mustapha Maihaja, explained that the donation followed report of flood disaster and the on-the-spot assessment carried out in the communities affected by flood in the state.

He said the Federal Government felt the pains and agony of the victims, expressing the hope that the materials would go a long way in reducing their sufferings.

The NEMA boss, who spoke through the South East zonal Coordinator of the agency Mr. Walson Ibarakumo Brandon, stated” the humanitarian relief assistance by the federal government was to ameliorate the sufferings of the affected communities.

In her response shortly after taking delivery of the materials, on behalf of the state government, the Executive Secretary, Enugu State Emergency Management Agency, ESEMA, Barrister Nkechi Eneh, said “the unique gesture by the federal government  was an eloquent testimony to‎ government’s welfare of her citizens.

Represented by her Special Assistant, Mr. Austin Ajuluchukwu, the ESEMA, helmsman, disclosed that the flood disaster affected no fewer than 50 communities in 9 council areas of the state.

While applauding the FG for the intervention, Eneh, assured that the materials would be transparently and judiciously distributed among the affected victims, immediately, so as to ensure that the purposes for the humanitarian gesture would be realized.

According to her, “It’s good the items are coming in batches as they come we distribute them to the affected persons.‎”

The Executive Secretary had listed the affected council area to include Igbo Etitit, Ezeagu, Udi, Nkanu- East Enugu North, Uzo-Uwani‎, among others.