Former Minister of State For Health, Silas Ilo is dead 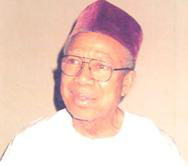 The former minister of state for health, and a founding member of the Peoples Democratic Party (PDP), Chief Silas Arinze Ilo, is dead at age 73.

This was announced Wednesday in Enugu by the deceased eldest son Chukwudi Ilo.

The junior Ilo said “He died in the early hours of Thursday 31st of October, 2013 at his London residence.”

Details of the burial arrangement according to him, would be announced in due course by the family.

Late  Ilo who hails from Oji River local government area of Enugu state was a public servant with a vast and admirable track record.

Until his death, Hon. Ilo was the chairman, South-East caucus of Rebuild Nigeria Initiative, ‘Project One Nigeria’.

He was a Church leader and the founder, Leaders’ Fellowship and Ministry of Forgiveness and Reconciliation (LFMFR).

Late Ilo was a management consultant, politician, a former governorship aspirant under the platform of PDP in Enugu state, amongst others.