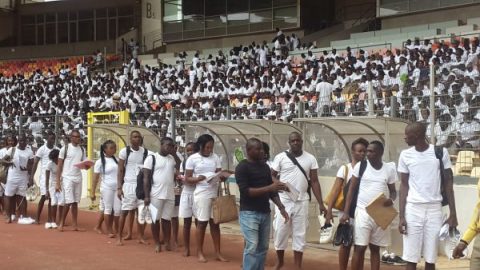 (AFRICAN EXAMINER) – The ongoing nationwide recruitment exercise being conducted by the Federal Road Safety Corps (FRSC) was disrupted for hours in Lokoja on Tuesday when one of the applicants collapsed suddenly and died.

The Kogi State Sector Commander of the FRSC, Mr Olisegun Martins, who confirmed the incident said that the applicant, a male collapsed shortly after successfully completing about a two-kilometre race.

Martins said that the applicant, who could not disclose his name even dropped his tally before he suddenly fainted and collapsed.

According to the commander, a team of medical officials of the FRSC joined by their Nigerian Army counterparts quickly attended to the applicant and administered first aid on him.

He was later taken into the army clinic in the Chari Megumeiri Barracks where the recruitment was taking place for treatment.

Martins said, however, that the applicant died barely 30 minutes after he was admitted into the clinic.

He said that the incident would not result to the suspension of the recruitment in Kogi, expressing his condolences to the family of the deceased.