Future of the Federal Republic of Nigeria at 53 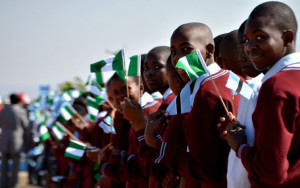 As school pupils on October 1, 1960, we were organised on lines and given a flag each to wave as some government officials took the salutes. It was memorable and joyful. My father was a local government councillor (1948 -1962) in Kabba Native Authority.  I was on one of the lines but the import of what we were doing that day did not fully sink into many of us. Today it has downed on us that our independence is different from that of the United States of America who fought and won independence.  The USA, whose constitution we copied, also has fine successive leaderships with discipline, focus and character. They had been wise to separate business from politics and religion from the presidency. We might have had it too soon and by leaders whose cultural identities could not organise a community to a desired goal. They simply wanted to be like the white rulers, doing nothing but living comfortably because their allegiance was to the Kings and Queens of United Kingdom. They might not have realised that every kobo must be earned in order for it to have some value.

Nigerians deserve to be dissatisfied with our different successive governments both in their style of governance and the contents of their characters while in government. They lack the art of developing the nation but rather they always capitalise on our diversities and differences; taking full advantages of ethnicities and religious affiliations. While our attention ought to be promotion of high technological advancements in business, health, transportation, defence, education or others we are unfortunately still faced with poor communication facilities, closure of our universities, poor general infrastructure, low wages and no commitment to national ideals and strong core value systems.

The poor achievements could be traced to bad governance aided by poor leadership and followers that remain indifference to good value systems. If you were in government your people would depend heavily on you and the resulting temptation is to look for extra income by stealing from government treasury or collecting from government contractors to please their desires. The value system did not exist either on paper or in character. Someone, an Asia/white South African, complained recently and getting worried about the health of Nelson Mandela of South Africa. Their current president has many wives and Africans see nothing wrong with that. The anxiety is not the pains Nelson Mandela is going through due to age but what would happen when the machines supporting his life are turned off. In fact, in Nigeria many of our leaders have had two or more wives, and possibly other children outside their wedlock. The western democracy we copied would not allow that. Such people would never be able to lead us to where we ought to be. They are blind leaders by western standards. Therefore the low moral characters of our leaders could not have contributed any goodness to our development. Instead we have been led by blind men mostly.

If Nigeria can imbibe true democracy and allowing each vote to count we may yet get to where we ought to be. At present the courts still play great part deciding election outcomes because the system is less than honest or transparent. Similarly oppositions are divided; they are more confused, and have no planned transformable agenda that can project the fast disintegrating and dilapidating nation. The military rules were equally bad, but as we now look back, each of them was able to provide a reasonable level of coherency and oneness in the nation; taken government by the power of the gun should remain condemned to the abyss nevertheless.

Another step should be truly using the so many great Nigerians that have ideas and good will for this nation. Nigeria has many human resources to the extent that our underdevelopment can only be traced to demonic, cultic and other plagues. We can never progress if our leaderships are products of evil associations that we claim we want to ban in our institutions. Many members of such associations may have graduated to become vice chancellors, senators, governors, ministers and even presidents of the country. They can never lead us rightly.

I was encouraged recently while the current leader of Sri Lanka traced his political descent to 1933 and his great grandparents.  Our leaders vision remains narrow selfish and temporal. There is a need to develop successions and preparation for handling over. For example the much heated current political terrain in Nigeria may not be divorced of the incumbent desiring to carry on whereas opponents within and without PDP having a different thought on the issue. The president can pre-empt the situation by having a plan B somewhere within his mind. The plan A is continuation and re-election but a plan B may be what is plausible and visible for the presidency, PDP, and Nigeria. A good calculation can win public applause, move Nigeria to where we ought to be and keep democracy and the nation on course. Winning wars is not by a military might but results of great calculations and informed decision making.

Nigeria is doing badly also in business due to cultural practices and unfriendly environments; Nigeria has the numbers on which to invest and grow thriving businesses. Supervision, commitment at managerial levels is in short supplies. Hence families have resulted into only businesses they can effectively manage alone whereas extra hands would have improved and raise the levels and capacities. However, Nigerians always want to run their own businesses rather than work for others whereas when they get out to America, Europe or other places like South Africa they are prepared to wash dishes and look after dirty old homes. Dignity at home is an invaluable asset and should never be traded.

Therefore as Nigerians celebrate at 53 they should look forward with hope but ready to improve on good governance, improvement in business and imbibing high level value systems. It is sad that the political system remains unstable with its index still on registration of parties, decamping and the like. One cannot still choose a party to support on an honest basis and for what they have done since 1999. Similarly we have not converted our oil earnings to mega businesses; the few that have done so live to consume their business before they die. Nevertheless the low moral value system remains the biggest challenge Nigeria is facing. Many have been deceived that it is right to live like others, do business like others, practice politics like others, work like others and marry like others. This is a wrong attitude because each of us is a chosen personality with nobility and goodness. We would only get far astray living just like others. Nigeria shall be greater still if only we are true to her creeds, loving each other because our being together is not accidentally, and working joyfully honestly hard for every kobo we need.