The Nigerian Governors Forum has condemned the suspension of Sanusi Lamido Sanusi as the Governor of Central Bank of Nigeria describing it asvdiversionary tactics to cover up alleged missing oil funds. 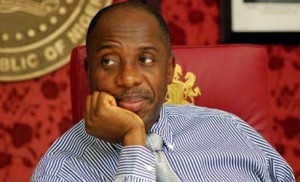 In a communiqué read by the chairman of the forum and the Rivers state Governor Rotimi Amaechi, the forum supported the call made by minister of finance Ngozi Okonjo Iweala  for a forensic audit of the NNPC Account.

The Governor Forum also raised concern over alleged deliberate refusal of the presidency to convene the National Economic Council (NEC) meeting for the past seven months even as it called on the Supreme Court to accelerate the hearing on the constitutional cases especially the case of the excess crude account and illegal deductions on oil subsidy.

The forum also raised the alarm that the Presidency is plotting to illegally impeach the Governor of Nasarawa state, Umaru Tanko Al-Makura.