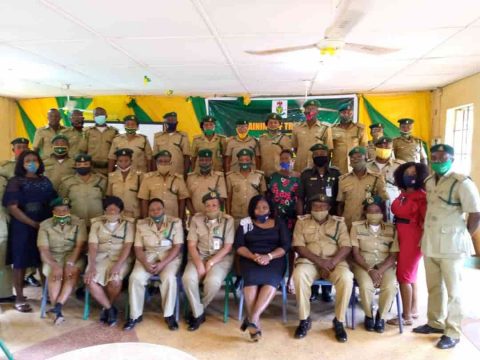 (AFRICAN EXAMINER) – A non-governmental organization (NGO), Prisoners Rehabilitation and Welfare Action (PRAWA), has begun the training of instructors and personnel of the Correctional Training school Enugu for the effective implementation of non-Custodian measures in the institute.

The organization explained that the objective of the week long training of trainers workshop is to build the capacity of instructors in the school and other various Nigerian Correctional Service training institutes with a view to enable them effectively train officers “and deliver the right knowledge using the non-custodian training curriculum, “non custodian  training, manual , operational guidance note and the non – custodial  standing order.

Speaking Monday during the opening ceremony of the training holding between 5- 9 October at the Enugu Correctional Training School, Executive Director of PRAWA, Dr. (Mrs) Uju Agomoh, said the exercise will also equip trainers with the right instructional methodology and approach, as well as facilitate understanding of all critical sections of the (NCSA) 2019, including non-custodian operational guidance note and the non-custodian standing order.

The PRAWA boss, who spoke via the Deputy, Barrister Ogechi Ogu, added that the training will equally ensure standardization of training methodology, instructional approach and strategies for evaluation of training effectiveness, stressing that it will also assist in  promoting  best practices and instructional excellence that would enhance efficiency in the implementation of non-custodian measures.

She stated that the non-Custodian measures which is all about reformation and adherent to global best practices will change the narrative of the system in Nigeria, pointing out that it  would also enhance the proper implementation of the Administration of Criminal justice Act (ACJA)2015 and Enugu state Administration of Justice Criminal Law (AJCL), 2017.

“According to the Conceptualization of the project, we have a pilot stage which is the Federal Capital Territory. Then, we have correctional Service Institutions across the Federation and they are six in number. The idea is that we go to this institution, train all the instructors that are in the institutions on Non-Custodian measures and they in turn will train all the officers that pass through such institutions. So, it is a training of trainers.

“Now, we have another level of training which is for the Deputy Comptrollers (DCs) of Correctional Service in charge of Non-Custodian Directorate in the state Commands.

“So, these persons have already been trained. They are 37 in number from the 36 states and the Federal Capital Territory. We have sensitization and awareness creation training for the judiciary, Workshop for the Judiciary, we are targeting judges in the FCT, so, this people we have trained half the number on 30th September, 2020, and we are training the remaining on November 2nd.

Asked if Nigeria was ripped for Non Custodian measures system,  she responded thus: “we are over ripped because what you call Non Custodian Measures originated from Africa, our great grand fathers were utilizing the same system of sanctioning people so, the fact that it has been copied and westernized and we are coming back to it. Re- member that it was the coming of the colonial masters that brought the system of imprisonment that we have. We never had that, So, we are over ripped for the system.

She, however, emphasized the need for effective and efficient implementation of the new Correctional and non-Custodian measures as contained in the new Act guiding the sector.

Comptroller General (CG) of the Service, Jafaru Amed , who spoke through the Commandant Training school, Enugu, Mrs. Mauren Mazi, had applauded PRAWA for its commitment in assisting government in tackling challenges in the Nigeria’s criminal justice system, assuring that the training will go a long way in keeping the instructors and participants abreast with the new Correctional and non-Custodian measures Act.

Our correspondent reports that the training is being attended by Senior and lower cadre Staff of the training school who are mainly instructors at the institute.