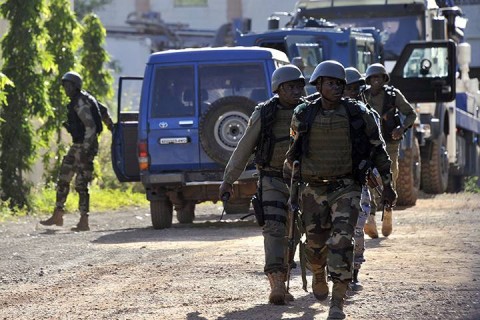 (AFRICAN EXAMINER) –  Gunmen shot dead 14 civilians in an attack on a village in Northeastern Mali, a Local Official said on Monday.

This is amid a spate of killings by rival ethnic groups and jihadist militants that threaten to derail a presidential election later this month.

Nanou Kotia, the mayor of the regional hub of Menaka, said the attack had occurred on Sunday in a remote village 55 km (30 miles) away, near the border with Niger.

“The assailants came and opened fire on people. According to our information, there were 14 people killed, all civilians, and one truck and three other vehicles were burned,’’ he told Reuters by telephone.

The mayor did not say who he believed was responsible for the attack.

Previous killings have been carried out by Islamist militants active in the area as well as by fighters from ethnic militia.

A statement by the Tuareg militia Gatia said the assailants belonged to a criminal gang operating along the Niger border and had targeted Tuareg civilians in the village of Injagalane.

The violence in Mali, which is also used by jihadist groups as a launch pad for attacks into neighbouring countries, worries Western powers such as France and the United States, which have deployed thousands of troops to the semi-arid Sahel region.

Malians are due to vote in a presidential election in less than two weeks.

The poll is meant to chart a way out of six years of political unrest and jihadist violence but the situation has only grown more volatile in recent months.

The jihadists some with links to al Qaeda first seized control over Mali’s desert north in 2012 before being pushed back by a French-led intervention.

But they have since regrouped and now regularly attack Malian and international forces. (Reuters/NAN)