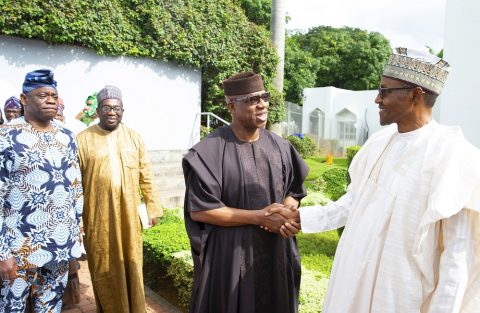 (AFRICAN EXAMINER) – President Muhammadu Buhari has described the late Moshood Abiola as a bridge builder who could have prevented the religious and tribal issues besetting the country now from happening, if he had been allowed to rule Nigeria.

Speaking on Tuesday when he received Elders and Leaders of Thought from Ogun State at the Presidential Villa, Buhari said, “if MKO Abiola was allowed to rule,  the religious and tribal issues now in Nigeria would not have been as strong,  because he ran on a  Muslim-Muslim ticket, chose his deputy from the Kanuri, a minority tribe and because of his personality,  he went across Nigeria and was accepted.

According to a statement issued by Special Adviser to the President on Media and Publicity, Mr. Femi Adesina after the closed door meeting, Buhari noted that Abiola used his resources and energy to convince Nigerians that all he wanted was a solid Nigeria and nothing else.

Buhari also said that he named the National Stadium, a national monument after the late politician because he knows that the youths would want to find out why such an important national institution was named after MKO Abiola in future.

He expressed appreciation to Ogun State Governor, Dapo Abiodun for mobilising such a strong delegation to thank him for the gesture towards their illustrious son.

The Ogun State delegation, led by the governor, had come to thank the President for the honour done the late Abiola, an indigene of the State, by conferring on him the highest national honour, Grand Commander of the Federal Republic (GCFR) for his ultimate sacrifice in enthroning democracy.

The delegation, which presented a big talking drum to the President, also used the opportunity to solicit for the rehabilitation of some federal roads as well as other critical infrastructure in the State, which they are convinced would decongest the gridlock occasioned by the movement of consignments along the Apapa – Oshodi expressway and improve the standard of living of Nigerians along the corridor.

At a press briefing at the end of the meeting, Ogun State Governor said the issue of roads in the state needed to be given urgent attention.

He said, “Ogun is named the gateway state for a reason, we are the gateway to one of the biggest economies on this continent, which is Lagos. You cannot go from lagos to anywhere else without going through Ogun State.

Consequently, we the gateway state stand to benefit from providing all the services that Lagos may need, that will also put us in a position where we should be the economic capital of this country.

“So what we intend to do between my Lagos State counterpart and I, is to find alternative funding for the roads. That is why we said we are going to create an enabling environment for a public, private sector partnership.

“We have identified public, private sector partners who are willing to invest, because these roads are commercially viable roads”, the governor said.