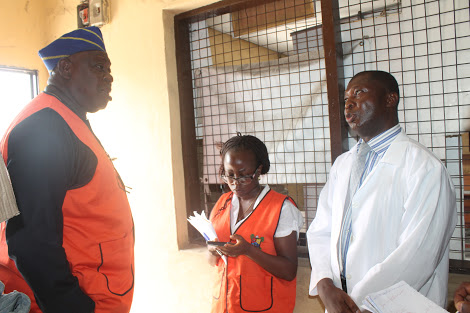 The Lagos State Government in collaboration with Global Emerging Pathogens Treatment Consortium (GET), the West African Task Force for Emerging and Re-Emerging Infectious Disease Outbreaks (WATER), African Gong and the Global Partnership Programme (GPP), Canada, is organising the three-day “Second African Conference on Emerging Infectious Diseases and Bio-Security,” which would hold between 27th and 29th July, 2016 at the Eko Hotels and Suits, Victoria Island, Lagos.

The theme of the Conference is: “Strengthening African Health Systems- Building resilience and capacity to tackle Epidemic Threats: Bio-security and Infrastructure in the aftermath of the Ebola Outbreak.”

The conference will focus on emerging deadly diseases, such as Ebola Virus Disease, EVD, Zika virus, Lassa Fever, Dengue Fever, among others.

Lagos State Commissioner for Health, Dr Jide Idris, at a press briefing in Lagos, Southwest Thursday said the essence of the second African conference on emerging infectious disease was to take proactive steps against the highly pathogenic emerging and re-emerging epidemic threatening the West African Sub-Region.

Underscoring the importance of the conference, Dr. Idris said the conference was carefully designed to address the sub-optimal of infrastructure and technical capacity for an indigenous response to contain biological threats from highly infectious pathogens.

According to him, the primary aim of the conference was to abate almost complete dependence on the developed world for effective response, adding that the conference would create an opportunity for the continent to derive biotechnological sustainability capacity and knowledge, while bringing together diverse participants from across the world and Africa.

“Ebola virus disease and other highly pathogenic emerging and re-emerging epidemic prone diseases remain threats to the West African Sub-Region and all hands must be on deck prevent and control their epidemics.

“You may recall that 28,645 people were infected during the last Ebola Virus Disease (EVD) outbreak in six countries in the West African sub-Region, out of which 11,324 died, representing 39.5 per cent case fatality rate. All deaths from the epidemic, except 14, occurred in Liberia, Sierra Leone and Guinea. Liberia was worst hit with 4,810 deaths. Nigeria recorded 8 deaths, while Mali recorded 6 deaths. All the affected countries have however been declared Ebola free.

“Also, Lassa Fever outbreak occurred in Nigeria between November 2015 and March 2016, in 21 States of the Federation, including Lagos State. The total laboratory confirmed cases were 80, out of which 50 persons died, representing 62.5 per cent case Fatality Rate. We also need to remind ourselves that about three weeks ago, 3 cases of Zika virus infection were diagnosed in Guinea Bisau. Nigeria also recorded a case of Dengue Fever a few weeks ago,” the Commissioner stated.

Dr. Idris emphasized that the conference would help develop the continent’s own strategic intervention and response mechanisms to increasing outbreak of Emerging Infectious Disease (EID) and biological terrorism threats.

He assured Lagosians that the present administration in the state was totally committed to improving the health status of Lagosians.