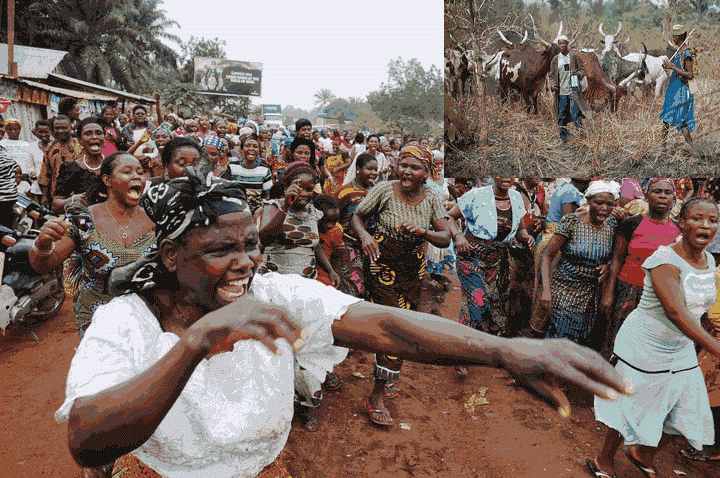 Enugu Nigeria,  (African Examiner) – The three Roman Catholic church Bishops in Enugu state on saturday led members of their Dioceses on a protest rallies over the menace of fulani herdsmen in the state, and elsewhere

The protest, which held simultaneously in the Dioceses of Nsukka, Awgu, and Enugu, attracted ‎scores of the church faithful and priest.

The Bishop of Nsukka Diocese, Most Rev. Dr Godfrey  Onah, moderated the exercise in that axis.

Although, unlike  Nsukka and Awgu Dioceses, where the protesters went round the streets, the story was different in Enugu, as the people held a prayer procession at the Holy Ghost Cathedral.

The Enugu protesters, had earlier planned to march round the streets before terminating at the Government House, where they would make their grievances known to Governor Ifeanyi Ugwuanyi, but decided to cancel the original arrangement for reasons best known to the Bishop.

The Enugu Bishop, later received Governor Ug‎wuanyi,  members of the State Executive Council and all the Security Chiefs at the church.

Addressing the mammoth crowd at the Holy Ghost Cathedral Enugu, Ugwuanyi, commended the church for the leading role it had continued to play in the struggle against social injustice, human rights violations and other crimes against humanity in every part of Nigeria.

‎He, however, described the attack on Nimbo community, where dozens of innocent people were murdered as “a day that will ever remain dark, sad and solemn in the memory of the people of Enugu State and indeed Nigerians at large.”

“On the issues you have raised in this rally, I wish to state that I address you today not only as a Catholic but as your Governor and the Chief Security Officer of Enugu State.

“While taking my oath of office, I swore to do everything within my powers to preserve the security of lives and property of the people of Enugu State.

“You can therefore be assured that I will not fail in this responsibility and be further assured that whatever message you convey through me to the appropriate authorities at Abuaj, will be promptly delivered.

“Regarding the proposed grazing bill, I assure you that I will duly convey your decisions on the matter to the State’s representatives at the National Assembly”.

Bishop Onaga, had earlier read  a joint press statement on behalf of the Bishop of Awgu and Nsukka Dioceses.

The statement read thus: “the free grazing of cattle in our area has now become a threat not only to the growing of crops, which is the mainstay of our sedentary people, but also to our lives.

“That the nomadic lifestyle makes policing and the pursuit of criminals much more complex and hazardous, while providing terrorists like Boko Haram operatives with ready cover for penetrating every nook and cranny of our country.”

The Bishops called on the government not to turn a blind eye to life-threatening problems of any section of the citizens.

“In the light of this, therefore, we call on the Federal Government to drop, without further delay, the so-called ‘Grazing Bill’, which is quite capable of tearing apart the fragile unity of our country.

“We urge all our local community leaders to refrain from entering into agreements with herdsmen or with any other group of persons that would create room for tension and crisis.

“We would advise that all such agreements already in existence be renegotiated in a way that would ensure justice for all the parties”, the church stressed.