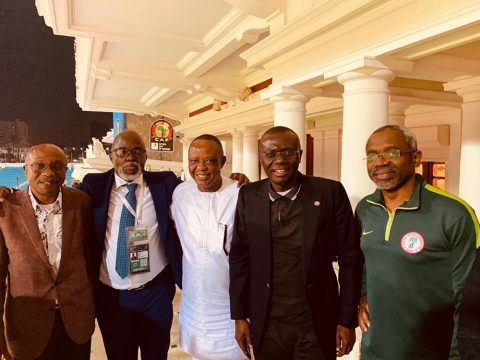 (AFRICAN EXAMINER) – The Lagos State chapter of the Peoples Democratic Party (PDP) has described the visit of Gov. Babajide Sanwo-Olu’s to Egypt for the on-going African Cup of Nations (AFCON) as insensitive, at a time the state faced two tragic incidents.

The Publicity of the party in the state, Mr Taofik Gani raised the concern in a statement he issued on Sunday in Lagos.

He said at a time the state was still mourning over Thursday’s pipeline explosion in Ijegun, it was disappointing that the governor had chosen to remain in Egypt.

Gani pointed out that governor was expected to have aborted his trip to visit the site to condole with the victims and community.

“Pictures of Mr Sanwo-Olu currently at the AFCON competition in Egypt have gone viral on social media, thus provoking reactions from various quarters.

“While we are not condemning the gesture of the governor to go and watch AFCON and support the Super Eagles, we are vehemently opposed to the timing.

“The PDP expected the governor to pay visits to the families of innocent people who lost their lives to the fire disaster.

“We also expected him to visit those who sustained severe burns at the hospitals and pick up their medical bills .

“The governor’s presence in Egypt at this time of losses to boat mishaps and explosion is insensitive, and we are urging him to return home to do the needful,” he said.

Gani said that the party had it in good authority that the trip of Sanwo-Olu along with some chieftains of the All Progressives Congress (APC) cost the state N470m.

He described the trip as a waste of tax payer’s money, saying it was morally wrong in view of the challenges in the state.

The Publicity Secretary said the problems of bad roads, gridlock and others were begging for attention, urging Sanwo-Olu to give governance priority.