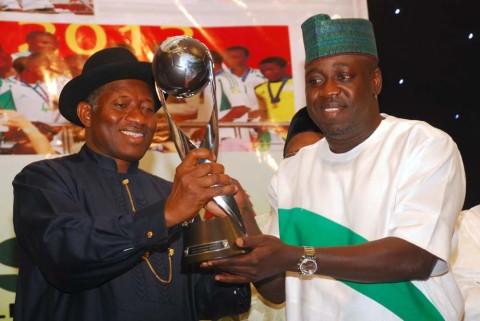 Nigeria’s President Goodluck Jonathan has rewarded the victorious Golden Eaglets with two million naira each for winning the FIFA under 17 World Cup which they won last Friday in Dubai by defeating Mexico 3 goals to nothing. 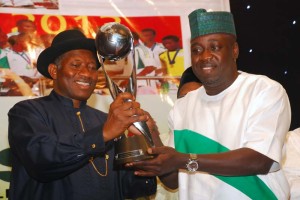 PRESIDENT GOODLUCK JONATHA RECEIVES THE WORLD  CUP WON BY THE GOLDEN
EAGLETS AT THE THE UAE 2013 FIFA U-17 FROM THE MINISTER OF SPORTS, MALAM
BOLA ABDULLAHI DURING A SPECIAL RECEPTION IN HONOUR OF THE GOLDEN EAGLETS
OF NIGERIA AT THE PRESIDENTIAL VILLA ABUJA

Also, the president announced three million naira for Coach Manu Garba, and 2.5 million for the assistant coaches. The team doctors, psychologists, secretaries are to collect N 500,000 each.

Members of the victorious team are to receive national awards also.

He advised that “amidst our joy and celebration, we must underline that the enduring test of the victory we have achieved will be the progress of this players.”

Adding that “our celebration today will be short lived if we don’t progress to win U-20, and of course the Senior Eagles that will represent us at subsequent tournaments.”

The Golden Eaglets were so spectacular throughout the competition scoring average of 3.78 goals per match. They scored  a total of 26 goals in 7 matches to become the most successful team in FIFA U-17 having won the trophy for the record fourth times.