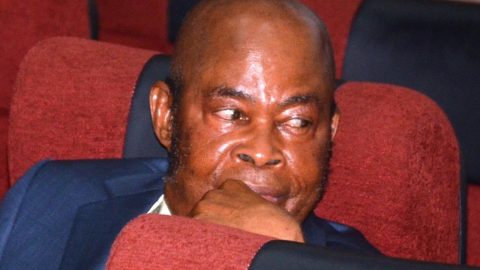 …to be Arranged Before CCT

(AFRICAN EXAMINER) – The office of the Attorney General of the Federation (AGF) has filed charges against Justice Sylvester Ngwuta of the Supreme Court accusing him of failing to to declare 28 plots of land to the Code of Conduct Bureau (CCB) between June 2, 2011 and July 19, 2016.

He is also alleged to own five cars which he did not declare in his asset declaration form to the Code of Conduct Bureau.

Justice Ngwuta is also accused within the same period, of engaging in the purchase and sale of rice, palm oil and other related products, while serving as  justice of the Supreme Court.

Ngwuta who is currently standing trial before Justice John Tsoho of the Federal High Court, Abuja on money laundering charges, will also be arraigned before the code of conduct tribunal on April 20.

Recall that Justice Ngwuta is one of the judges whose houses were raided by the Department of State Service (DSS) in October 2016. A huge sum of money was said to have been recovered from his (Ngwuta) home.

African examiner gathered that a similar charge of two counts has also been filed before the CCT against Justice Adeniyi Ademola who is being accused of trading in foreign exchange.