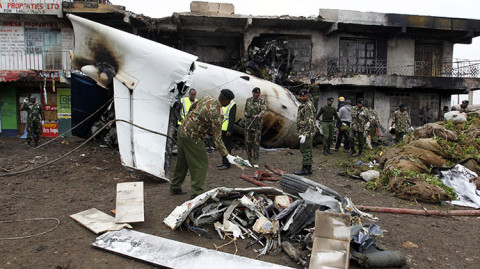 The crash has been reported of a Fokker 50 cargoplane into a commercial building in Nairobi, the Kenya’s capital, shortly after taking off from the JKIA (Jomo Kenyatta International Airport), Nairobi.

According to the Kenyan Airports Authority (KAA) in a tweet, four crew members on board were feared dead. 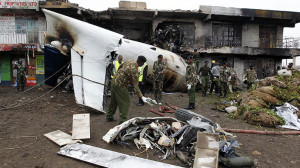 The cargo plane crashed at about the time when the building was expected to be largely empty, according to local officials.

“All four on board perished… it hit an electric post before crashing on a building and bursting into flames, “a senior police officer told AFP.

Security personnel stand at the site of the wreckage of a cargo plane that crashed into a cSSceommercial building on the Utawala estate on the outskirts of Kenya’s capital Nairobi, July 2, 2014. (Reuters / Thomas Mukoya)

The plane was transporting the mild stimulant known as Khat to the Somali capital, Mogadishu, said Joseph Ngisa, the airport’s head of police investigations.

Preliminary investigations have indicated that, the plane was flying low after takeoff and might have hit an electricity pole before the crash.

The airport was closed for “a few minutes as a matter of procedure,” but has now been reopened and “is operating normally,” said KAA security chief Eric Kiraithe.