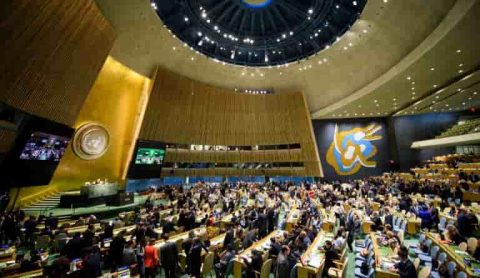 Kenya will serve a two-year term in the powerful council beginning Jan. 1, 2021.

Its victory came during the second round of voting by member states in the General Assembly at the UN headquarters in New York on Thursday.

The results were announced by the President of the Assembly, Amb. Tijani Muhammad-Bande, who presided over the election.

Kenya secured 129 votes, just one point above the required two-thirds majority of 128 votes, as against Djibouti’s 62.

NAN reports that Africa has three non-permanent seats, currently occupied by Niger, Tunisia and South Africa in the council.

Tunisia and Niger took two of the seats in January, meaning that Kenya will now succeed South Africa, whose term ends in January.

The first round of voting held on Wednesday but none of the two countries could secure the two-third majority to clinch the coveted seat.

The Security Council is the most powerful organ of the UN as it is the only body that passes legally binding resolutions.

Its powers include the imposition of international sanctions and authorisation of peacekeeping operations, besides giving members a strong voice on international peace and security issues.

The non-permanent members are elected by the General Assembly for two-year terms, which are distributed on a regional basis. (NAN)