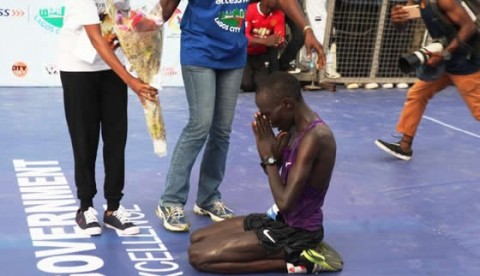 He was closely followed by Kikpemboi Hosea, also a Kenyan athlete who finished the forty two kilometers race that started in the National Stadium, Surulere in Lagos and the finished at the Eko Atlantic City in Victoria Island with a record time of two hours sixteen minutes thirty four seconds.

The star prize of $50,000 in the marathon that attracted over 20,000 local and international athletes, flagged off by the Minister of Youths and Sports Mr. Solomon Dalung around 7:10 AM went to Abraham Kiptom, while Kikpemboi Hosea got $40,000.

The first Nigerian to cross the finish line Philip Sharubutu from Nasarawa state got N1,000,000  as a consolation prize to encourage Nigerians in the marathon sporting programme, while Halima Hussein, an Ethiopian won the gold medal in the female category having finished the marathon race with a  record time of 2:38:38.

Lagos State Governor, Mr. Akinwunmi Ambode at the event said the marathon has come to stay to stay, just as he assured that the state government will work towards making the competition the best of its kind in the world.

The Governor who spoke at the finish point of the Marathon at the Eko Atlantic City, expressed delight in the massive turn out of international and local athletes for the Marathon, saying that Lagos was proud to join major cities in the world to promote the Marathon.

“Lagos State is glad to host athletes from different parts of the world today as we flag off the Lagos City Marathon. The last time this event held was 30 years ago. I stand here to tell you today that this event is here to stay. We are committed to sustaining this event and ensuring consistent improvement to make it one of the best marathons in the world,” he said.

Governor Ambode said his administration remains determined to make the state the hub of sports in Africa adding that it will embrace other international sports, while Lagos will bid to host Continental and International sports tournaments going forward.

Speaking to journalists shortly after presenting awards to the winners, Governor Ambode said government with the Marathon, combined entertainment, sports and hospitality to create jobs for the people and allow the youths to engage themselves positively.

“We are proving it, this is just the beginning. We would double the scale of it next year and then we would make it more interesting than ever before. This is a world class event and Lagos is back on the map of the world as a choice destination for tourist and investment, as a sports centre and as an entertainment hub and that is what we are committed to doing”, he said.

Also speaking at the event, Vice President of the International Association of Athletics Federation (IAAF), Col. Hamad Malboum thanked the organisers for putting up a sterling show and assured that the IAAF will partner with the state to make the Marathon the most remarkable athletics event in Africa and in the world.

In the same vein, Minister of Sports, Hon. Solomon Dalung, expressed appreciation to Governor Ambode, saying that the Governor by his actions is trying to repossess the lost glory of the state.

He recalled that during the yuletide period, the Governor spent a whole night at a fiesta held in Lagos, which according to him has launched the state to take the lead in the entertainment industry.

“I believe this is not an accident, but rather a part of the concerted efforts of the Lagos state government to play a major role in leading sports. The turnout and registration for this event attests to the fact that Nigerians love sports and that all Nigerians need is an enabling environment to express their potentials.” The minister said.

On his part, the Managing Director of Access Bank, Mr. Herbert Wigwe, whose organisation is the major sponsor of the Lagos City Marathon, said they were proud of the opportunity to collaborate with the state government to empower the people with a sense of history.

He said his organisation will continue to collaborate with the state government to make the tournament bigger and better, adding that next year’s edition will take place on the 11th of February 2017.

Some of the athletes also commended the organisers of the Marathon for making adequate logistics to ensure a hitch free and successful tournament.

One of the athletes, Lekan Taiwo, said, “I am really impressed with the Lagos State Government. From the take off point, it was obvious that a lot has been put into the planning of this event. I saw ambulances, traffic control officers at strategic locations and even street sweepers were on ground to clear the waste generated from the participants. We had people coming out to cheer us up. This is commendable”.

In the male category, Kenyan Abraham Kipton was first to breast the tape at 2 hours 16minutes 19 seconds to win the grand prize of $50,000, while his compatriot, Kipkemboi Hosea came second posting a time of 2 hours 16minutes 34 seconds and cart home the $40,000 prize.

Debebe Tolosa of Ethiopia finished third with a time of 2 hours 16 minutes 40 seconds and went home with $30,000.