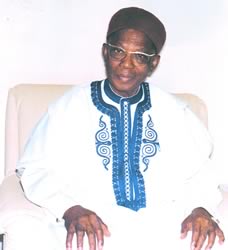 The remains of Late Former Minister of Transport, Alahji Umaru Dikko who died last Tuesday in a London hospital is billed for burial this evening in his Kaduna residence, north Western Nigeria.

Alhaji Dikko’s corpse who died at the age of 78 was being delayed in London due to some factors with United Kingdom (UK) authorities and some family related issues.

The remains has been speculated to have arrived especially as the late political leader was a Muslim whose remains supposed to have been interred immediately after death.

The late Minister who served in Alhaji Shehu Shagari’s Second Republic adminstration recorded an unprecedented but famous history of being drugged and dumped in a diplomatic marked crate in an attempt to extradite him from London to Nigeria to answer some financial misappropriation allegations leveled against him while serving.

The foiled attempt created a frosty diplomatic relationship between the British and Military Junta of General Muhammadu Buhari–Tunde Idiagbon.