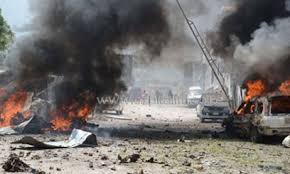 (AFRICAN EXAMINER) – At least six people have been killed in a car bombing outside a Mogadishu restaurant, including a senior Somali military general.

Government officials have told VOA’s Somali Service that General Abdi Bashir Aden was among those killed in the Monday bombing.

Ten others were injured when the bomb went off shortly before 6 p.m. local time, next to a popular eatery and coffee shop known as the Italian Cafe. Witnesses said they believe the explosion was timed for an hour when many customers sit outside the shop to enjoy afternoon tea and coffee.

The coffee shop is across the street from the headquarters of Somalia’s immigration directorate, and is adjacent to the Sunrise Hotel.

Militant group al-Shabab claimed responsbility for the attack, saying they were targeting officials for national security and immigration. The coffee shop is across the street from the headquarters of Somalia’s immigration directorate, and is adjacent to the Sunrise Hotel..

Meanwhile, four government soldiers were killed Monday in a roadside explosion in Kabtanlas village near the town of Qoryoley, in the Lower Shabelle region.

The soldiers were traveling on a military vehicle when the explosion occurred, officials said./voa