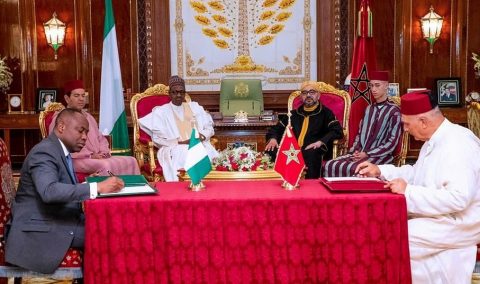 (AFRICAN EXAMINER) – Nigeria has signed with the Kingdom of Morocco three agreements; including a regional gas pipeline that will see country providing gas to countries in West Africa sub-region that extend to Morocco and Europe.

The signing of the agreements, which took place in Rabat, Morocco, was witnessed by President Muhammadu Buhari and King of Morocco, His Majesty King Mohammed V1.

The signing according to a statement issued Monday by Buhari’s Senior Special Assistant on Media and Publicity, Mallam Garba Shehu followed a meeting between the two African leaders that focused on ‘’strengthening economic relations in gas resource development, global investments and agricultural training and management’’.

The feasibility study of the agreement on the pipeline, which was signed by the Group General Manager, Nigerian National Petroleum Corporation (NNPC), Mr Farouq Said Garba, and Director General of the National Office of Hydrocarbon and Mines, Mrs. Amina Benkhadra, Shehu confirmed would be concluded by July 2018.

The construction of the pipeline the President’s Spokesman would be phased and based on increasing needs of the countries crossed and Europe, for the period of 25 years.

The statement stated that the Nigeria Morocco Gas Pipeline (NMGP), which was designed to be 5,660km long, wold reduce gas flaring in Nigeria and encourage diversification of energy resources in the country, while cutting down poverty through the creation of more job opportunities.

The NMGP the Presidency stated would further encourage utilization of gas in the sub-region for cooking and discourage desertification.

Similarly, the Minister of Agriculture and Rural Development, Chief Audu Ogbeh and his Moroccan counterpart, Mr Aziz Akhannouch, signed a cooperation agreement on vocational training and technical supervision, expected to enhance skills on better management of agricultural outfits in Nigeria.

President Buhari, assured the King of Morocco of Nigeria’s full commitment to the actualization of all the agreements signed.