There are times when industrial strikes can be counterproductive or change the entire system of equations. This is happing in the health sector between the Federal Republic of Nigeria and her striking doctors. The Nigerian Medical Association (NMA) has resolved to continue with its ongoing nationwide strike action, until more concrete efforts are made by the Federal Government of Nigeria to meet the association’s minimum demands. The Minister of Health has felt disappointed by the ongoing nationwide strike by the resident doctors and fruitless efforts by stakeholders to end the industrial action that has resulted into much causality of middle class citizens that could not pay for their healthcare other than through public clinics and hospitals. The Minister of Health Professor Onyebuchi Chukwu is of the opinion that his government has a point to call for a public debate between the NMA and government representatives. What point does a government that treats issues piecemeal have? 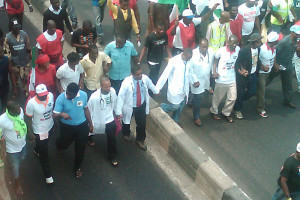 The public must be aware that in most of these strikes the primary underlying points are never brought up as main issues; but only secondary issues are discussed. It would also be recalled that through strikes and counter strikes Nurses in the hospitals have moved up from their low points in the 1960s and 1970s to very comfortable positions where they could be call Directors. All other paramedical staffers have similarly achieved reasonable uplift where they could head and control their departments apart from obtaining enhanced payments. They achieved their goals respectively through individual union’s efforts in negotiation and industrial actions. Today with the latest development by President Jonathan’s regime anyone could head our Medical Centre whether or not they hold the magic MBBS degrees. A pharmacist, laboratory technician, a nurse or any other most senior officer in the Medical Centre can aspire to be its Medical Director. This development has offset our medical colleagues of which my wife is in that privileged family; a Fellow of the Royal College of Radiology London.

How do we get to this mess where we all lose the order and connection we inherited from the colonial masters? In those days a medical doctor, no matter how junior in age and date of appointment, was the natural head of the hospital. Government might have signed off this arrangement because the other unions demanded it and they had more connections and negotiating powers. Or put in another way, the medical doctors have been fighting their own battles whereby they have got money from several sources without improving the system but may now lose headship. The resulting benefits from doctors’ strikes do not trickle to private doctors or to other paramedics in government hospitals. Individualism and lack of comprehensive outlook to the entire medical sector has led us to a situation where the doctors may no longer be in charge after all.

We have very similar scenarios in the Universities where ASUU and NASU have separated their issues and believing that they could confront government individually. If NASU could achieve what the paramedics have achieved in the medical sector, very soon heads of departments and deans of faculties may no longer be the exclusively preserved from lecturers if Chief Technologists or the Registrars in the Faculties are more senior in their units. Too many strikes and uncoordinated have been only counterproductive and resulting in abnormal results. We are certainly in regimes where leadership lacks both professionalism and adequate experience of his office. Even at the national level many of the ills facing the nation could have been prevented if only the officers were more professional, experienced, diplomatic and highly competent.

The way out for NMA is in their accepting the new reality and picking the pieces from there. We need a Medicare system that works and not always held in ransomed. We need a system where workers have good pay, receiving continuous training and eventually going out on a good retirement plan that works. We also need a government that is holistic it her approach to issues concerning the entire system and not one dancing to sector demands always. The prevailing situation is that ASUP, NASU, ASUU or others are individually on strike and there is no time a particular union is not on industrial strike in Nigeria. This is quite unhealthy for the national economy and the individual institutions. It is always easy for government to renege on its commitments and agreements when they are made privately between government and individual unions. We must negotiate collectively.

Our appeal to NMA is similar to our appeal to Boko Haram holding our nation hostage. When our health sector is held hostage by matured individuals like enlightened medical colleagues for whatever reasons the effects could be worse than Boko Haram killing 10,000 people in five years. When the Nigeria Union of Teachers is on strike, as they are in many states of the federation right now, the effect is similar to Boko Haram refusing to let our children go to school. Nothing is in isolation in the new global world. If we want to condemn one set of ills we must condemn all others of similar effects. Worse still, at the end of each strike, payments are made to workers who went out on the strike and for work never done.

Our moral level must be raised high than those of the lawmakers who see nothing wrong paying themselves month wardrobe allowances that are mouth watering. It is evil and their results could be seen in our unrest and insecurity in our society. No Nigeria Senator ought to earn more than the approved salary of a Nigerian professor in a Federal University. The insurgencies and insecurity challenges in our nation are possibly the result of extraordinary take home of political officers. They put additional pressure on the viability of the entire democratic system and create great unrest in the community. Government should be very sensitive disturbing the equilibrium in the system as little as possible in order to earn respect and cooperation from the electorates. Appropriate awards in wages and responsibilities by government would go a very long way to forestall incessant industrial actions. Similarly unions ought to be working together for the overall good of their sectors respectively.