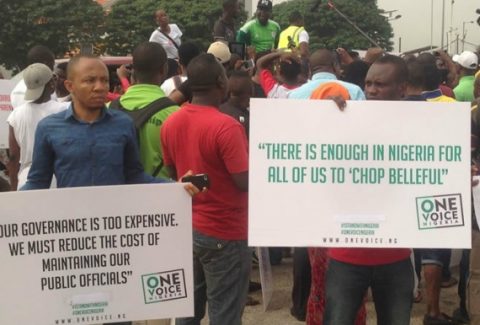 LAGOS, NIGERIA (AFRICAN EXAMINER) – Despite the cancellation of the planned protest across the country convened Monday under the #IstandWithNigeria by the popular musician Innocent Idibia – 2Baba, against bad governance, another group under the name #OneVoiceNigeria and other groups staged protest in Lagos and other parts of the country.

The protesters who were monitored by anti-riot police led by the State Commissioner of Police Mr. Fatai Owoseni demanded for transparency in the budget of the National Assembly; reduction in prices of essential commodities and food items; application of rule of law in the country’s judiciary system and strict obedience by the executive to the court orders among others.

Some of the placards carried by the protesters are:

“Buhari is ruining the country. He has to fix the forex issue, fix the economy and encourage private sector.”

It would be recalled that 2Baba who initiated the move cancelled the protest Sunday, majorly due to serious security concern.

In the meantime, 2Baba has dispelled the rumour that he has been arrested by the operatives of Directorate of State Services (DSS).

In a series of tweets by him Monday, 2Baba thanked fans who showed concern over the purported arrest.

“Thanks for the concern, guys. I am fine and free.

“Reports about DSS arrest are not true. We are still compiling responses for the leadership.

“State your opinion on the social media with the #IStandWithNigeria. Peace! One luv always!!!” the multiple award winning singer requested.

However, other groups staged their protest in Abuja, Benin, the Edo State capital and Port Harcourt the Rivers State capital.

Speaking in Lagos during the protest, CP Owoseni explained that security operatives presence was not to stop the rally, rather, meant to maintain law and order as well as check eventuality – among of which is the hoodlums hijacking the protest and use it to cause mayhem in the metropolis.

Mr. Owoseni has last week when the aborted rally has reached the top gear vowed that the state Police Command would not allow the action to hold, citing likely security breaches.

“Government of the rich, for the rich, making rules for the poor,”

“Unemployed people are hungry and angry,”

“Buhari is ruining the country. He has to  fix the forex issue, fix the economy and encourage private sector.”