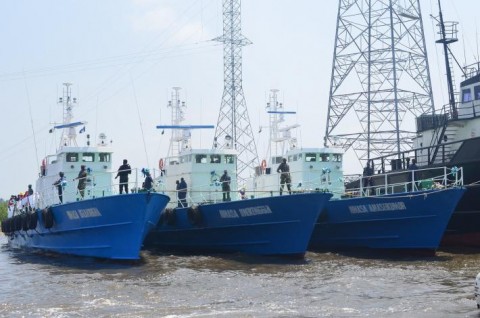 The Search and Rescue personnel of the Nigerian Maritime Administration and Safety Agency (NIMASA) have rescued three crew members and recovered one body from an incident which occurred about 65 miles from shore, just 10 nautical miles south west of the Bonga FPSO near Warri where two vessels; MT Elixir and MT Tank collided midstream.

According to her, divers and other rescue personnel were still at the site of the incident where eight crew members of MT Tank appeared to have been trapped.

She said that preliminary reports showed that the incident occurred at about 12 midnight on Monday 19th October, 2015 and that MT Tank got broken in the process and thus taken in by water.

“The Ag. Director General of the Agency, Mr. Haruna Baba Jauro has directed comprehensive rescue operation and ordered a thorough investigation into the incident to ascertain the remote and immediate causes.

“The Acting DG expressed sadness over the loss of life occasioned by the incident urging crew members to exercise more caution in navigation especially around terminals.

“The three rescued crew members are receiving treatment at Twins Clinic Warri at the behest of NIMASA while the body of the deceased has been deposited at the mortuary. Rescue operation is still ongoing for the remaining eight crew members”, Tumaka informed.