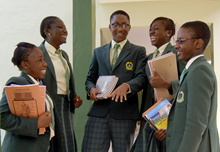 The Nigeria Medical Association (NMA) has changed its earlier stance of warning against the resumption of the country’s public and private schools on Monday September 22, 2014 as it has called on the school owners to make available all necessary measures to prevent further spread of deadly Ebola Virus Diseases (EVD), ahead of next week.

NMA backslide was made public Monday during a meeting with the members, House Committee on Education, Education Minister, Mallam Ibrahim Shekarau in Abuja.

The association’s National President, Dr. Kayode Obembe, stated NMA new position  was arrived at, after reviewing the efforts of the Federal, Lagos, Rivers and Enugu state governments to contain the “recent importation” of Ebola from Liberia. He stated  there was no need keeping pupils at home beyond September 22.

He however called for vigilance among the stakeholders, saying there was no need relying on, or hinging their “position on rumours, lies and ignorance”.

Dr. Obembe urged the international and port health services to be on the highest level of vigilance and preparedness to screen all entrants into the country for fever.

Similarly, Obembe called for establishment of the infectious disease hospitals in all the 36 states of the Federation as well as the Federal Capital Territory, Abuja so as to be able take care of any “viral haemorrhagic fever and other medical infectious disease emergencies.”

NMA also tasked all the local government areas across the country to provide health services with a medical officer and other necessary staff for  “level of epidemiological intelligence and surveillance for the prevention” or re-entry of the disease into the country.

In the same vein, the All Nigeria Conference of Principals of Secondary Schools (ANCOPSS) which has also previously kicked against the government resumption date has shifted its position. The association has therefore directed that all necessary health measures must be available in all schools, before the Monday resumption.

ANCOPSS requests and standard included improving the sanitary conditions of the schools, provision of  water and soap for regular hand-washing by pupils, ensuring general cleanliness and engaging expertes on EVD control.

The Nigeria Union of Teachers (NUT) representatives did not attend the meeting. Its National Chairman, Michael Olukoya who last week opposed September 22 resumption date said the union declined the inviation as it upheld its last week position. Still, Olukoya stated Tuesday that the association would meet today, deliberate on the debate and make its final resolution public after.

The Chairman, House committee on Education,  Hon. Aminu Suleiman, indicated that the committee’s last week promise to intervene on the controversy, was after members gathered reactions from many Nigerians.

Hon. Suleimon promised to present its findings to the entire house for final deliberation and decision on the issue.