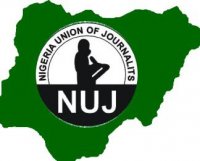 The Nigeria Union of Journalists (NUJ), Abuja Chapel has commiserated with the family of the Managing Editor (North) of the New Telegraph Newspaper, Alhaji Suleiman Bisalla, who was killed in Wednesday bomb blast at the EMAB Plaza in Abuja.

Bisalla was among the 21 persons confirmed dead in the evening eruption. The chapel expressed grieve over the death, identified with his family on the painful development and prayed for the repose of his soul.

In a related development, the Managing Director/Editor-In-Chief of The New Telegraph Mr. Gabriel Akinadewo has announced the death and condoled the late editor’s family.

Bisalla, was said to have left the Abuja office of the newspaper to fix his phone at the plaza around 3.30pm before the unfortunate incident. Bisalla’s remains is among others deposited at the Maitama General Hospital yesterday in the wake of the eruption.

His brother younger Mohammed, confirmed his death in the hospital. Bisalla, before his present appointment, was the former Deputy Editor of Daily Trust Newspaper in Abuja. He joined the New Telegraph late last year. The late Managing Editor who holds Master’s degree in International Relations from the University of Jos, hailed from Gindiri in Mangul Local government area of Plateau State.