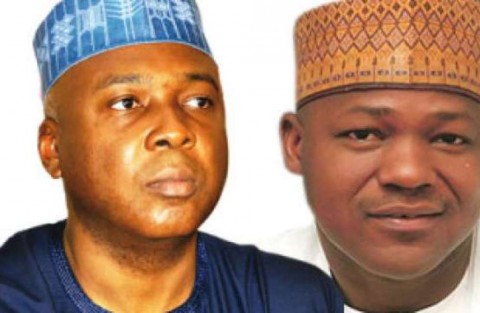 BALTIMORE, MD (AFRICAN EXAMINER) – Former President Olusegun Obasanjo recently wrote a letter to the Senate President Mr. Bukola Saraki and his House of Representatives’ counterpart Mr. Yakubu Dogara about mismanagement, funds abuse, and misappropriation of resources, unnecessary purchase of vehicles and over-blown wages and allowances at the National Assembly.  Obasanjo noted that the representatives of the people are insensitive to the plights of the people and the nation, and they are treating themselves to opulence at the expense of the nation.

I have previously written about the N5 billion voted for the purchase of vehicles by the National Assembly, but the issue has not been resolved as the National Assembly has not reversed itself.  They plan to buy the vehicles is still on and it has the support of Saraki, Dogara, Ekweremadu and most members, irrespective of their political affiliations.  The senators and legislators (or are they legislooters, still?) from the APC, the president’s party, have not distanced themselves from the wasteful and reckless purchase, and they have not kicked against it.

As things are today, nothing separates the APC folks from those from the PDP; all of them being birds of the same feather – at least until they stand up to kick against the idea.  As things stand today, the level of dishonesty at the National Assembly put Roman Senate during the Second Triumvirate of Gaius Octavius (Octavian, Caesar Augustus), Marcus Antonius (Mark Antony), and Marcus Aemilius Lepidus to shame and makes the Rome Senators look like saints.  Today, very corrupt, criminally-minded and selfish people are at the National Assembly and pretty much representing themselves, their stomachs and pockets.

The senators and representatives are stealing from the people and have been obdurate about what they do and steal from the Nigerian people, and the former president – not a saint himself, but a man with a knack for speaking the truth to other people – was on point and came to the right conclusion:

“The recent issue of cars for legislators would fall into the same category. Whatever name it is disguised as, it is unnecessary and insensitive.

“A pool of a few cars for each chamber will suffice for any committee Chairman or members for any specific duty. The waste that had gone into cars, furniture and housing renovation in the past was mind-boggling and these were veritable sources of waste and corruption.

“That was why they were abolished. Bringing them back is inimical to the interest of Nigeria and Nigerians.”

It is becoming very clear that we have a National Assembly that is made up of greedy and selfish people who are in the parliament to help themselves to the nation’s wealth.  But now that the wealth is no longer there and everyone has to tighten his/her belt, will these louts not follow the executive to do the same and cut back on their excesses?  I very much doubt that the National Assembly will ever change – not with Bukola Saraki as Senate President.  Mr. Saraki’s antecedent comes with a life full of freebies and a grab-and-go style.  Where the leadership is this untrustworthy and unreliable, you are not likely to get people-centred and decent results from the National Assembly.  Abuse of office, misuse of resources, and blatant waste of funds are going to be the hallmarks of Saraki and Mr. Dogara.  There is a lack of oversight to ensure that funds and resources are audited, ascertained, and verified regularly.

The vehicles the National Assembly is planning to spend N5 billion to buy have already been monetized and yet these guys are happy to double dip.  For how long will the deceit and recklessness continue?  Most of them there lack morals and are no different from Professor Oguazor in Wole Soyinka’s The Interpreters.

When the former president said the that the federal legislators allocated to themselves, salaries and allowances above the template approved by the Revenue Mobilisation, Allocation and Fiscal Commission for National Assembly members, he did not say anything new, but his pronouncement along this line is one major reason many Nigerians doubted if the National Assembly will ever support the war against corruption because they have not shown any desire to change their ways.

Rather Saraki and Dogara are working in tandem to open up and bring back many previously blocked loopholes for wasting state funds.  Until the two men are restrained and forced to curtail the excesses and waste of funds they enjoy engaging in, the National Assembly will remain the bottomless pit and a huge drain of dwindling national resources.  Opportunism must have a limit, but as we can see Mr. Saraki cherish the benefits that opportunism provides and he will stop at nothing to have his way and continue to spend and to purchase items that have no bearing to the work of the Assembly.  You will think that a man who has an on-going corruption case against him will chart a new course, but that is not Mr. Saraki.

The National Assembly has been trying to probe some government agencies and fight corruption, but you cannot fight corruption when you are not even accountable.  An Assembly that is corrupt and unaccountable cannot claim to be answerable to the nation and its people, and the least qualified person to lead the chamber is Mr. Saraki.  Mr. Saraki has a history that resides in an unholy past and he cannot suddenly become the gatekeeper of holiness and integrity.  He also cannot promise to give what he does not have.  He has become a laughing stock and people wonder how a hyena will protect the flock.

It is obvious that the Senate and House need to take the hundred (100) level Politics class in good governance, transparency, accountability, due process, responsiveness, and, more importantly, ethics.