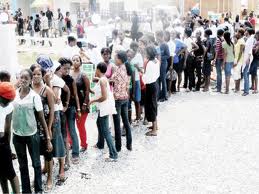 For the keen political watchers, there has been no shortage of doubt that the 2019 general election in Nigeria would be without strategic ambush among the political gladiators which of course forms part of every conventional democratic process.

What has however caused concern among Nigerians is the volume of treacheries, horse-trading, and human tragedy tagged party defections recently displayed by these political players; a feat propelled by silent animosity within and outside the parties which have consequentially trumped up hidden political tensions to where they can be seen and possibly dealt with while leaving innocent Nigerians confused.

Indeed, this appalling signal that all may afterward not be politically well with the country was first dispatched by the Nigerian youths, through their orchestrated not-too-young-to-run campaign; an advocacy that culminated in a bill that President Muhammadu Buhari has since appended to law.

Despite this great accomplishment, it appears from the events of the past weeks that the youths were unmindful of the inherent difficulties associated with transforming such law into action or unanticipated the echoing intrinsic political environment of ours.

In line with these strange and shocking revelations on our political wavelength, the youths appear to have become despondent politically- a development precipitated by the sudden discovery that politics, as played on our shores, cannot be traced to any ideological background.

Looking at commentaries, they (Nigerian youths), and other global watchers are not particularly happy that no basic ideological differences exist among the political parties in the country as they are mere broker parties that conspire daily to cease power with no positive strategy to pragmatically promote traditional social values or regulate social behaviors in their pursuit of power; a state of affairs that is considered bad for morals.

It is therefore by no means a surprise that the push for a generational change in leadership by the youths has suddenly waned with the vast majority  retiring to their former preeminent position-the political gallery as spectators, some divided along part y lines, while others have taken solace in social media where they have resumed   the praise singing role or what is referred to as ”Otinkpu” in the Igbo local palace for their political godfathers whom they hitherto rejected and accused of neither adding value to their lives nor pointed at roads to opportunities.

Though a dangerous development, as wisdom born from experience bears eloquent testimony to the fact that such concession made in the past turned out to be an irretrievable step backward and for the youths to now blackout of this fight, definitely will translate to losing forever.

it is not impossible in the writer’s views  that apart from the huge capital involvement in the political activities in Nigeria which has become a native, the political spirits of these youths who were at the vanguard of  challenging the status quo  and effect  social and political change, were further  dampened by their realization that  the nation from its current standpoint is disinterested in creating leaders embodied with virtues that the world can respect and leaders that have moral and ethical principles that we can applaud with enthusiasm.

Arguably also, it may not be completely wrong to  assert that the youths were initially lured into  participating in the nation’s democratic process by their believe in  the words of Thomas Paine who once remarked in his book titled ‘COMMON SENSE’  that ‘the law is king, that vigilant adherence to the rule of law strengthens democracy  by ensuring that decisions would be tested, studied, reviewed and examined by institutions designed to improve policy and ensure that those who govern operate within the constitutional structures..

But contrary to the above table ideology, the event of past weeks has shown the youths that things are different here, and it’s not law but the inordinate will of our ”leaders’ that is king; thus precipitating confusion, and despondency like a cloud of fire on the youths.

Also supporting the reason for this unexpected development of apathy towards partisan politics by the Nigerian youths is the fact that globally, a leadership position is viewed as an opportunity for effecting social, cultural, religious and political change.

But if there is any useful lesson learned by the youths of this country in the past days, it is their understanding that power in the context of an average Nigerian leader is not about affecting socioeconomic and political change but rather targeted at protecting the personal interest.

To the ‘leaders’, it is not about service but personal aggrandizement. This, in the writer’s views, has become not just a governing liturgy but a common prayer of invocation- as an effect, corroded the atmosphere for political trust and coexistence between the ‘leaders’ and the youths.

It is, however, curious developments that while the wider world is busy generating new ideas and staging major debates about doing things differently in a world that is rapidly changing, our leaders are taking actions that are objectively viewed as inimical to our socioeconomic development and may possibly get us stunted as a nation.

Very instructive, the political events of the past weeks has obviously blown harsh wind into our space and placed a heavy moral burden/consequence on our leaders; with innocent  Nigerians viewing their policies as unpopular and their actions as corrupt.

In view of the above challenges, the major responsibility before Nigerian youths is how to develop, and accelerate the process that will shape our political geography and create an environment conducive for the reemergence of a fully functional democracy.

With this in mind, rather than lose ground, the youths should remember that a nation succeeds or fails by the way they challenge the unknown and cope with fears.  Also functioning as guide,  a point  they {the youths) must not fail to remember is that it requires a prolonged effort to effect a change, and change the backward nature of the people as a necessary pressure is needed at the beginning

Going forward, the youths should embark on an aggressive campaign and develop a formidable community organizing power that no one can ignore. This will take a long hour and the travel will be excruciating but the youths must be ready to pay the price if they anticipate becoming politically relevant anytime soon.

To further save the soul of this country from the ” political ‘airtight cage’, Nigerian youths must be committed to, and galvanize moral and political strength to say no to instant gratification and political praise singing.

And, even if the youths fail to penetrate the public offices come 2019, they must like their counterparts at the global stage develop the capacity for supporting candidates with a personal commitment to protecting the people’s rights and programs that will promote human skills especially that of the youths.