OPINION: COVID-19 And the Nigerian Economy 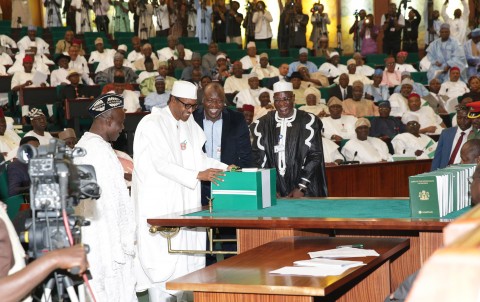 (AFRICAN EXAMINER) – The Central Bank of Nigeria (CBN) has expressed concern over the impact of COVID-19 on the local economy. He said the toll, especially the declining global oil price, was becoming severe, calling for massive investment in agriculture. Its Governor Godwin Emefiele spoke at the African Economic Research Consortium (AERC) Senior Policy Seminar XXII in partnership with CBN in Abuja. The seminar has as its theme: “Agriculture and Food Policies for Better Nutrition Outcomes in Africa”. Emefiele said the outbreak of the coronavirus had dampened consumer confidence resulting to decline in private consumption and global demand slowdown. He said the sad development had posed a great threat to the economic gains achieved across Africa in the recent past. Emefiele said the seminar could not have come at a better time than now when economies within the region were inundated with challenges resulting from the impact of the global economic slowdown, and currently facing further deterioration in global activity owing to COVID-19. He stressed the need for the countries on the continent to massively invest in agriculture.

The CBN boss said: “Very much like we have seen in the past, food is often one of the immediate causalities of any catastrophe on the African continent. The reason is not far-fetched, a sizeable proportion of the population is food poor. “Africa is not winning the war against acute hunger and malnutrition. Food insecurity and malnutrition plague the lives of millions across the continent.”

According to the 2019 Global Report on Food Crises, Africa remains dis-proportionally affected by food insecurity with more than half of the global 113 million, 58 per cent to be precise acutely food-insecure people living in 33 countries in Africa. “Here is the irony, Africa holds 65 per cent of the world uncultivated arable land, particularly its vast 400 million-hectare savannas which are the world’s largest agriculture frontier. “The continent of Africa should have no business with food insecurity. Regrettably, its agriculture continues to be vulnerable to climate-related shocks, disease, weak input supply chains, conflicts and economic shocks.” “Disturbingly, the Food and Agriculture Organisation (FAO) has predicted that Africa could add 38 million hungry people to the world’s number of hungry people by 2050 due to climate change,” he said.

Emefiele said that unlocking the huge potential of agriculture must, therefore, be at the heart of any meaningful engagement on the economic and social development of the continent. He said the region had the capacity and must become the food basket for the world, rather than a net importer of food. Emefiele said the importation of food by the continent was unacceptable, saying that Africa spends $35 billion on the importation of food annually according to report by the African Development Bank (AfDB). According to him, the continent must urgently develop policy measures around building what has been termed grey matter infrastructure in Africa to end the scourge of malnutrition.

It would be recalled that President Muhammadu Buhari only recently set up a Presidential Task Force to spearhead the campaign against the novel Coronavirus (COVID-19) in Nigeria. The task force, headed by the Secretary to the Government of the Federation, Boss Mustapha, was in response to the potential effects of the pandemic on healthcare services in the country and the economy. A statement by the Senior Special Assistant to the President on Media and Publicity, Mallam Garba Shehu, said the task force would coordinate multi-sectoral actions in the event of an escalated outbreak.

The statement reads: “Given the current global outbreak of the novel Coronavirus and its potential of causing significant disruption to health services in the country as well as impacting negatively on the economy, President Muhammadu Buhari has established a Presidential Task Force for the Control of the Coronavirus (Covid-19). “This action is in preparation for the unlikely but probable major outbreak of the disease in the country which will require a multi-sectoral inter-governmental approach as advised by WHO similar to that adopted for the HIV epidemic in the last two decades. “The start and finish task group is   expected to deliver within a maximum of six months.”

Recalled also that, despite several attempts at diversifying the national economy, oil remains the mainstay of the Nigerian economy contributing about 90 per cent of the annual revenue, hence, it is worthy to note that, the Organisation of Petroleum Exporting Countries (OPEC) has marked down its global oil demand growth in 2020 as a result of the coronavirus (COVID-19) outbreak from 1.1 million barrels per day (bpd) to 480,000 bpd. The Organisation is also proposing to cut oil output by 1.5 million barrels per day if its non-OPEC allies led by Russia agree to the proposal, which will be presented to the 8th OPEC and non-OPEC Ministerial meeting. If the proposal sails through, OPEC members will cut production by 0ne million barrels per day while non-OPEC allies will cut production by 500,000 barrels per day. This was disclosed this at the 178th extraordinary meeting of the Conference of the Organization of the Petroleum Exporting Countries held in Vienna, Austria.

The oil cartel noted that the COVID-19 outbreak has had a major adverse impact on global economic and oil demand forecasts in 2020, particularly for the first and second quarters adding that the global oil demand growth in 2020 is now forecast to be 0.48 million barrels per day (mbpd), down from 1.1 mbpd in December 2019. Moreover, the unprecedented situation, and the ever-shifting market dynamics, means risks are skewed to the downside, the group said, noting that the further impact of the COVID-19 outbreak on oil market fundamentals necessitates further continuous monitoring.

The Conference commended all OPEC Member Countries, as well as non-OPEC countries participating in the Declaration of Cooperation, for their continued commitment to achieving and sustaining balance and stability in the market. Member Countries reaffirmed their continued focus on fundamentals for a stable and balanced oil market, in the interests of producers, consumers, and the global economy. The Conference emphasized the ongoing dialogue with consuming countries, and the consultations undertaken in a collegial spirit before reaching decisions. Member Countries are resolute and committed to being dependable and reliable suppliers of crude and products to global markets. The Conference confirmed that its next Ordinary Meeting will convene in Vienna, Austria, on 9 June 2020, and noted that September 2020 will mark the 60th Anniversary since the founding of OPEC in Baghdad in 1960.

Similarly, the International Monetary Fund (IMF) plans to provide $50 billion to help low income and emerging market countries deal with the coronavirus outbreak. According to the global lender, the amount will be raised through a rapid-disbursing emergency financing facility and $10 billion of it will be available at zero-interest for the poorest members. Speaking about the rapid spread of the disease, IMF’s Managing Director Kristalina Georgieva said over one-third of the fund’s member countries were directly affected. “This is no longer a regional issue, it’s a global problem calling for a global response,” she stressed. Georgieva explained that one-third of the economic losses from the COVID-19 outbreak would be direct costs such as loss of life, workplace closures, and quarantines. Two-thirds, she added, would be indirect, including impacts on consumer confidence, business behaviour, and financial markets. “The good news is that financial systems are more resilient than before the global financial crisis. However, our biggest challenge right now is handling uncertainty,” Georgieva said. She added that global growth in 2020 would be below last year’s level.

“How far it will fall, and for how long, is difficult to predict and would depend on the epidemic, but also on the timeliness and effectiveness of our actions,” the IMF chief noted. The World Bank announced $12 billion as an immediate intervention for countries coping with the health and economic impacts of COVID-19. The new coronavirus emerged in Wuhan, China, last December and has now spread to over 75 countries, with the global death toll estimated at 3,500 and more than 92,000 confirmed cases. The World Health Organisation (WHO), which had declared the outbreak an international health emergency, has updated the global risk level to “very high”.

“We are still test-running the tracks. Commercial activities are yet to commence fully. “To test-run the tracks, we brought in two coaches, each coach takes about 25 passengers. So the two coaches take about 50 passengers. “We have got signals from the passengers and the engineers that the tracks are ready to run, but we need to complete communication, signalling and station buildings. Once that is done, we are good to go. “We are bringing in 20 new coaches and four new locomotives, 10 coaches will be deployed to Abuja-Kaduna and the other 10 to Lagos-Ibadan.

Therefore, it is a good development that Nigeria is taking proactive measures to curb the rampaging spread and negative influence of COVID 19, this will help the country to meet its planned expectations in several areas and aspects of the national economy.