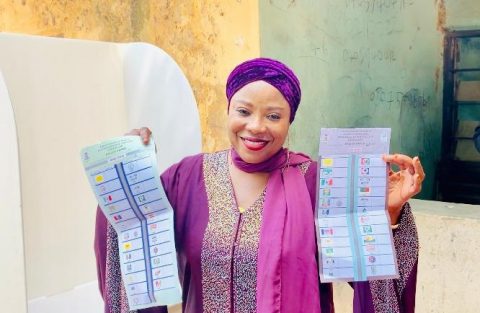 (AFRICAN EXAMINER) – Politicians all over the world are interestingly different. Some politicians are mere noise makers and attention seekers. In most cases, characters under this category are lightweight when it comes to ratings and delivery of critical political assignments.  However, there is a class of politicians, who in their style, believe more in actions, far more than, trivialities. These sets of politicians are not only brilliant, but very focus; resolute; discipline and always have their eyes on the results. For this type, whether they are heard or not; visible, allowed to take front stage or otherwise, they are less bothered, yet, they are always willing to work and ultimately, achieve results.

Without doubt and with all sense of modesty, the current Honourable Minister of State of for the Federal Capital Territory (FCT), Abuja Dr. Ramatu Tijjani Aliyu conveniently comes to picture, when conducting a check of astute politicians who match actions with their words and who strive and deliver results.

The Minister might not be known to so many political watchers; still, those who have come in contact with her or in the past, have related with her on various issues, including politics, appreciate and agree to the assertion that, Dr Aliyu is a grass root political mobiliser.

Dr. Aliyu, a native of Lokoja in Kogi State, North central Nigeria, has a quiet but long journey in her home State, Kogi and national politics. She was elected the National Woman Leader of the defunct All Nigeria Peoples Party (ANPP) for two terms before the amalgamation of political parties to form the All Progressives Congress (APC). She was a strong member of the merger committee and a member of the constitution drafting committee. She was later elected as the first women leader of the APC. she was also once elected as the President of the Council of African Political Parties.

Interestingly, Dr Aliyu played a big role in her state and beyond, in the build up to the 2015 general elections, in which the incumbent President, Muhammadu Buhari emerged the winner. Specifically, she actively involved in the Presidential campaigns, which took her to the nooks and crannies of the confluence state and other states of the Federation, to mobilize women and other eligible voters to elect President Buhari to the number one seat.

The Honourable Minister is ever focused and ready to go when it comes to delivering results for her party and its candidates. Again, she proved her mettle in the just concluded Kogi State governorship election, which held on Saturday, November 16, 2019.

Since the Independent National Electoral Commission (INEC) announced the last election and re-run to the Kogi West Senatorial zone, Dr Aliyu did not relent; she was proactive and, in the end, made a significant political point!

Ahead of the decisive election, the Minister did not restrict her campaign to the ruling APC, rather, she canvassed support for the incumbent and re-elected Governor Yahaya Bello across the political parties.

This moved yielded an amazing result as 58 opposition political parties defected to the APC and pledged to work for the party’s victory in the poll. Among the political parties were the Grassroots Development Party of Nigeria (GDPN), Democratic Alternative (DA), National Conscience Party (NCP), People Redemption Party (PRP) and Democratic People’s Party (DPP).

Dr. Aliyu’s popularity and respect (for her) in her native domain is not contestable. While at the palace of His Royal Highness, the Ohimege Igu Agabaido, Alhaji Abdulrazak Koto, in Koton Karfe Local Government, during the campaign, the monarch said of her, among others, “We are very proud of you because you have started impacting on the lives of our people and I want you to remain focus.’’

Her campaign for the last governorship election climaxed gloriously. Dr. Aliyu met with the APC ward leaders in Lokoja, the State capital. At the parley, she urged them to mobilize support for Governor Bello. This mobilization eventually worked out positively.

Dr. Aliyu, the Zinarriyyan Lokoja, during the campaign proved that she believes and practices Leadership by example.  All for the success of her party, she took on the early ferry ride across Budan river last Saturday, to her hometown alongside her friends, relatives and APC supporters to vote for the candidate of her party.

The significant question to ask is: did all the efforts eventually pay off? Indeed, they did. This is evident in the outstanding performance of her party both in her polling unit and ward.

According to the results declared by the INEC, the APC at her Yagba’s polling unit, scored 350 votes, against the PDP 62 votes in the governorship election. In the same vein, the APC polled 480 votes to PDP 53 votes in the Kogi West Senatorial rerun.

In all, APC in Dr Aliyu’s Kakanda ward scored 5,631votes while PDP polled 1,109 votes. in the Governorship election. In the Senate rerun, the APC recoded a total of 4,907 votes while the PDP scored 2,013 votes.

Apart from working for her party’s victory, Dr Aliyu is a good mediator. She once alighted from her vehicle when witnessed crisis at a rally among the APC stalwarts.

Moving forward, she immediately summoned the leadership of the party to an all-night meeting – where all the grievances of members were brought up and amicably resolved.

Finally, the Honourable Minister has proved herself admirably in different political fronts before and up till the present. Since she has never been wanting in expectations from her, it can easily be justified that Dr. Ramatu Aliyu knows her onions and if given the chance, will deliver in all the responsibilities assigned to her. Her present office is equally instructive and strategic. I’m sure she will continue to showcase her true potentials in the national political space.