OPINION: Effect of the First Epistle of Obasanjo to Buhari 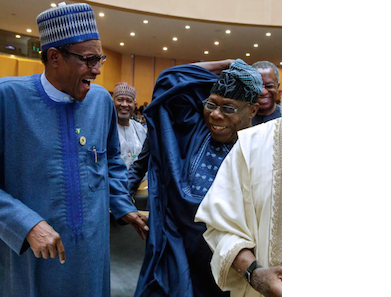 (AFRICAN EXAMINER) – General Olusegun Obasanjo (Ph.D), a former Nigeria Head of State and later its President, is not only a man with multiple facets and many parts but is fast becoming a man of many letters. Recently he bagged a Ph.D. (Christian Theology) from the famous National Open University of Nigeria (NOUN) at the age of 80 years. The objectives of his thesis, title “Resolving the Unfinished Agenda in Liberation Theology: Leadership, Poverty and Underdevelopment in North Eastern Nigeria” and its entire content is for another day’s discussion. However it is clear from the title that during his research study he might have observed lack of leadership, extreme poverty, widespread socioeconomic inequalities, gross underdevelopment, especially in Africa and the North eastern Nigeria in particular. Hence it may be inferred that his First Epistle to President Buhari, who had been a military governor of that sub region, is in order.

We don’t know if the main objective of the said letter is meant to turn Nigeria from its present emptiness to a society overflowing in abundance, or just to criticize because things are not going for Nigeria as expected, or Baba Obasanjo is working for a comeback by proxy. But we do know that if any society must truly be overflowing with abundances that society has to give the right set of people a complete access to leadership. In Christian Theology we have been taught by Jesus, the Master, that a blind man cannot lead its society out of the woods. Hence it looks to us that Nigeria may remain in its present emptiness with or without this epistle because the writer has being part of the ruling class. He mayneed to tell us what part he played to get Yar’Adua, Jonathan or even this same Buhari installed. If allegedly they had failed him it would be because the change the writer expected is not a miraculous idea for a set of leaders who have refused to change.

Let’s not forget to congratulate our PhD graduate, his Excellency Chief Olusegun Obasanjo, who had humbly submitted himself to studentship at the age of 80 years and had been found worthy, both in character and learning, which resulted in the prestigious award. This is also not the first time Chief Obasanjo would write and always writing not brief epistles. He wrote 18 pages to President Jonathan in 2013 and now 20 pages to President Buhari in 2018. We may be expecting some 25 pages to the next president should Dr OBJ consider the coming president be found wanting and performing below his expectation, and needing to be told the detail of his or her job. The point is that these epistles carry a common notion that our serving officials have gone astray wondering in the wrong. Thus they needed to be told the right focus of their jobs. We certainly don’t know at this point who loves Nigeria more between the writers of these letters and their recipients. Also the need to be shown the options awaiting public officials between honour and disgrace, between allowing others to carry on with the mantle of leadership or chaining down the entire country with the loads of their personal weaknesses, limitations, lack of vision, and nepotism.

Unfortunately, this epistle long as it is, has not been point blank on what direction to go. There is no guarantee that removing a Buhari would lead to improved governance or improved purchasing powers of individual Nigerians who are largely unemployed, poorly paid and yet not paid as at when due. The epistle has also not provided a new political model of how to get rid of corruption and politicians of violence parading selves as the focus of attention. The entire system needs to be resolved by installing functional and accountable governance with appropriate and qualified candidates. The present system seems to have failed and thereby Nigeria is becoming a failed State because of leadership and systemic failures.

Hence we can post more questions to OBJ that are begging for answers. For example, is OBJ taking order from the violent street mob or from the equally hostile and unfriendly news media? We think it’s neither. Our guess is that OBJ is simply being himself, but a typical product of both the Nigerian army and Yoruba-Egba Elitism. Many products of the Nigerian army often exhibit impatience towards Nigerian politicians and the wrong belief that they can perform better whereas Yoruba-Egba Elitism think they are in a higher class than the other Yoruba; the slave returnees contributed largely to their early contact with western education and exposure. Any PhD research in Christian Theology has nothing to contribute to personal attributes and characters of individuals except that such theses only open the eyes of physical blindness and proving a measure of society poverty. There is no automatic spiritual growth that can be gained by any level of academic study unless one is given in addition from above, with or without a research. Nevertheless the society is expected to benefit from the new Obasanjo (PhD). The society stands to benefit from his new understanding of the society level of poverty and low leadership. Unfortunately Buhari is from a different cohort despite going through the same Nigerian army background. This may explain why the epistle is more likely to be seen and read along regional and religious diversities.

We tag the said letter “First Epistle” because already hundreds of commentaries have been contributed. The letter was most likely meant to generate public opinion collaboration and directing same public in the selection of the next president. The ball remains in Buhari’s court and he may choose to play it or ignore it. This is why many similar letters are coming into the media with the issue of looking for what ought to be most Nigerians preoccupation for the 2019 general elections. This type of epistles can only encourage more writings and more public discourse but they wouldn’t solve the inherent corrupt and ineptitude attitude in Nigeria political life. Would President Obasanjo have allowed such a letter to be written to him while in office? We doubt it because we have a champion that can hit hard but also would be unable to absorb an equally hard hit. Some boxing champions can deliver great punches but when so equally hit the result is a knockout.

Nevertheless, after a great study in Christian Theology it is expected that a vision will flow out using the pure word of God that creates and saves. There is a need to save the communities by creating new social orders that distribute care and national assets evenly for an egalitarian society. There is a need to find the appropriate political system for Nigeria, a system different from the expensive presidential system only paying each Senator 36 million naira monthly with no significant results. The difference between a message from the divine and another from mere academic inference is that the divine massage would be accompanied by a solution and not return void.  Both classes of epistles may create societal reactions and public responses but the difference in eventual results is the essence. In particular, the Nigerian society is already over traumatized that only epistles that can create positive impacts and meaningful changes may reduce the pains the politicians have been delivering on their constituencies, and the ordinary men on our streets who only go out on their daily bread missions.