OPINION | IPOB: A Delusion Taken Too Far, By Charles Ibekwe 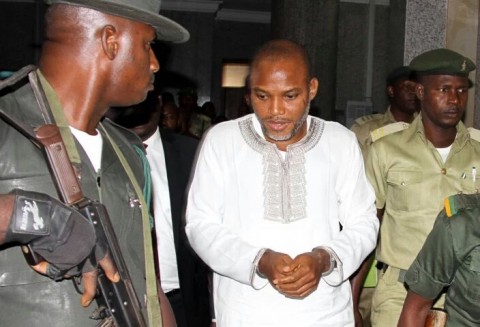 (AFRICAN EXAMINER) – The puerile announcement by the Indigenous People of Biafra that it will boycott the Special Board of Inquiry set up by the Nigerian Army to investigate allegations of right abuses is both laughable and saddening at the same time. It is laughable because it exposed the comical side of the fraud that has been presented as a struggle for self determination by a narrow group that has exploited the silence of the greater number of Igbo people as acquiescence. It is saddening because it confirms that the characters behind IPOB have become delusional to the point of believing their own lies.

Their lies are such that at the height of the US Presidential Elections they  stopped short of labelling the Republican Candidate, Donald J Trump an Igbo man. That period saw them tell lies that stood logic on its head and should have been the red flag to see psychiatric help for members of this group. Their claims at that time included bunkum like Trump promising them the actualization of a defunct Republic. Trump’s to do list allegedly included freeing the remanded IPOB gang leader, Nnamdi Kanu even though he is standing trial for grievous offences.

The outcome of the election worsened the mass delusion of IPOB members who behaved as if one of the world’s most enduring democracy runs on whims. Yet this delusion revealed a sinister dimension to the extent they will go to propagate lies in pursuit of a failed agenda. We are not talking about some off the cuff inaccuracies here but something more profound. They went to the pains of photoshopping misleading texts unto pictures of President Trump holding up declarations he just signed  – the texts of these frauds are always to the effect that the US was demanding Biafra independence. They went further to clone or mimic responsible news organisations to be able to pass off such frauds as the real deal. The only name for this sick act is called ‘fake news’. It is bad. It is perverted and emanates only from those with criminal intents.

It was however not the first time that these frauds were deploying fake news in furtherance of their doomed project. Fake news had been deployed on a commercial scale to lie about the nature of the face-off their radicalised wing had with the military; it had been deployed to announce casualties from such encounters only that they run into problems showing the body counts for their claims, which again forces them to deploy more fake news about abductions and military seizing corpses of members who are actually alive or never existed.

Allegations of extrajudicial killings, torture and other claims of human rights abuses against the Army flourished on the strength of the fake news. One would ordinarily expect that the decision of the authorities in setting up the Special Board of Inquiry would be explored to surface these claims of right violation if there is substance to them. But the reverse is the case. Apparently because the IPOB militants know that they have no evidence to back up their many claims the next reflexive step is for them to announce a boycott of the inquiry.

The sad and comical aspect of that statement is that they went to a great pain to cite the Nigerian Constitution, the same one they have vowed never to recognise. They further advertised their befuddlement by citing cases decided by the British courts, same country they accuse of making them to be part of a zoo.  The impression created is that of a group of people caught in a mind loop and are unable to decide with any degree of certainty whether they are going or coming. One is therefore hard pressed to understand how  a bunch of addled indolent refuse to recognize a set of law – since the constitution of Nigeria connotes its indivisibility, and the same time want to be treated by the same instrument.

The intention to boycott the inquiry was let out of the bag with their admission that it is meant to delegitimize the panel by claiming, in the future, that they never appear before it. Yet, here is an IPOB for whom the Special military board has already made concessions by refusing to name it as an accused entity  owing to the crimes it has committed in the south east against  Igbo interests. A consensus among right thinking analysts is that many persons in Igboland would petition the board of inquiry to bring the atrocities committed in furtherance of IPOB’s interests to light.

These crimes against humanity include denial of means of livelihood in the course of the several economic blockades that the group usually impose – it has another one scheduled for May 30th this year. Other things it would be accused of before the panel are forced disappearance of persons opposed to its ideologies, murder – including killing of security operatives, extortion, radicalization of youths, gun running and a barge load of infractions that should see the entire members and leadership of IPOB taking a trip to the Hague.

If IPOB has facts and evidence of abuse and extra judicial execution by the Nigerian Army it should then be bold to step forward and present same since the inquiry is in the full public glare with the media reporting proceedings. Its presentation before the panel could be the precursor to a larger investigation but that is only if what it would present would not be another staple of fake news similar to the fabled Donald Trump’s endorsement of IPOB’s. It turned out Trump detests fake news and its purveyors and would no doubt have placed this dangerous group on his backlist by now, a reality that was not undone by the infantile solidarity march that was a cover for launching attacks against security personnel in Nigeria.

There is a last minute face saving window for these recalcitrant elements by way of the decision of the South-East Governor’s forum to intervene and appeal for a soft landing for them. The decision is no doubt informed by the apparent hurt that IPOB’s insurrection is causing the economy of the region. Sadly, this well intentioned intervention was again hijacked by characters that have been addicted to fake news to the extent that they keened about how south-east governors warn federal government over Nnamdi Kanu, the IPOB leader standing trial for treason. This behaviour highlights the fact that IPOB members have no interest in political solution and they are allergic to peaceful approach to issues – there is no incentive for them to pursue political solutions since they have never bothered to position themselves to win council ward so they are not primed to win offices they can use to politically sway decisions in favour of their ill conceived quest

The disdain they have for constituted authority is thus mirrored in the rudeness with which they treat political leaders from their region, which makes the disdain they treat the federal government and its institutions with negligible. One must first respect one’s kinsmen before extending the product of that upbringing to others.

This piece would not be complete without urging the Special Board of Inquiry not to be fazed by tantrums from IPOB as it is a known trait of losers. There are other parties that have indicated willingness to appear before the panel and the boycott by IPOB would not in anyway invalidate its outcome as this is a solution finding process and not a popularity contest. Let the board follow best practice in extending invitation to all and sundry by adequately publicizing same and the world can then judge who the abuser is.