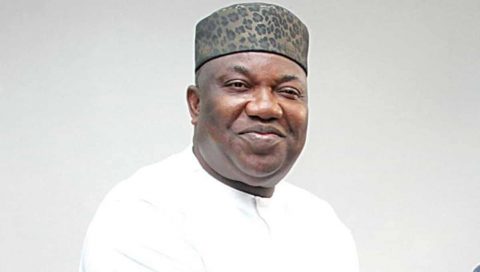 (AFRICAN EXAMINER) – The governor Ifeanyi Ugwuanyi led Enugu state government
is to spend a sum of N210 million naira in the refurbishment of toilet facilities at the international wing of the reconstructed Akanu Ibiam  Airport (AIIA) Enugu, Southeast Nigeria.

This was disclosed to newsmen during a media briefing held  weekend in Enugu by the  Southeast Governor’s Forum (SEGF), Committee on the Airport Rehabilitation/Palliative Works, which said the present state of the toilets is embarrassing to the airport.

African Examiner reports that some residents of the state who spoke to our Correspondent under condition of anonymity on the said amount described it as “highly outrageous.”

It would be recalled that the reconstructed AIIA, was officially reopened by Nigeria’s Minister of Aviation, Senator Hadi Sirika last Sunday, after 370 days of its closure, 24, of August 2019, to be precise.

Chairman of the Committee, Engr. Chris Okoye, who spoke on behalf of other members, presented a comprehensive and detailed situation report on the airport project which gulp the sum of N10billion naira released from the federal government as a special fund.

According to him, the amount to be spent on the proposed refurbishment of the modern toilet facilities though, sounds outrageous, but what’s it, going by the quality of what will be fixed, adding that the facilities will be operated  electronically.

Okoye,  recalled that the airport  project commenced on November 4, 2019, with mobilization of equipment and personnel to site, while  Construction work began  on  November 17, 2019 after the installation of necessary equipment on site, hinting that the runway is 3km long, 45m wide with 7.5m shoulder on either side, also with orientation of 08/26.

He reiterated that work on the airport runway has been 100 per cent completed, contrary to speculation in some quarters that it is still work in progress, disclosing that one of the major facility in an international airport, the airfield lighting is 35 percent completed, while the runway shoulders have reached 85 per cent completion.

Other areas the Chairman mentioned include the crash roads with five per cent job done and no completion date stated; dredging/desilting of drainage on 70 per cent completion.

The committee leader, equally hinted that  the terminal building which work is expected to be completed on September 20, 2020; has reached 35 per cent completion, while the entrance toll gate which commenced  on July 20, 2020 was 75 per cent completed.

Most of the sections yet to be completed, according to him,  comprised the second phase, which would not stop the operation of the airport.

He disclosed  that once the above was completed, it will allow night operations at a visibility not less than 800 meters on RWY 08 and landings on RWY 26 at a RVR not less than 350 meters; that is assuming the Instrument Landing System is operational.

The Chairman said: “there are other projects being handled by NAMA in upgrading the navigational facilities, including installation of new satellite communication (VSAT), which facilitates the availability of RCAG (Remote Control Air to Ground), ATS/DS (Air traffic Services Direct Speech – Airport to Airport hotline communication via satellite), AFTN (Data exchanges between Akanu Ibiam and other airports around the world via satellite).