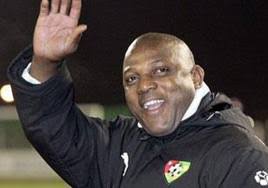 ABUJA, NIGERIA (AFRICAN EXAMINER) – The Nigeria Football Federation (NFF) and other stakeholders in the country’s football circle has expressed shock over the death of former Super Eagle Coach, Stephen Keshi.

NFF President Amaju Pinnick in a condolence message Wednesday morning said he was too shocked to make comments. He described Keshi’s demise as “devastating” saying the Edo-born footballer was a “superhero.”

He informed that he had reached out to late mid-fielder family as well as promised to lead a delegation of some NFF Board and Congress members to Benin City for a condolence visit Thursday.

Pinnick also promised that the NFF Board would meet and decide on the best way to honour Keshi as well as fully “involved in the arrangements for the final burial rites.”

Meanwhile, NFF President as a mark of honour to Keshi has directed officials at all the centres hosting matches of the Nigeria Professional Football League on Wednesday to observe a minute silence before they kick–off.

Similarly, Nigeria glass house has also communicated the death to the Confederation of African Football (CAF) and its world counterpart, FIFA.

Late Keshi who is survived by four children and a mother lost his wife, Kate 33, due to cancer last year, led the Nigerian first football team to the world cup in 1994 hosted by US. He was also the first indigenous Super Eagles Coach who won the African Cup of nations (AFCON) in 2013 hosted by Ghana and Mali.

He died in his home State, Edo early hours of Wednesday at 54.