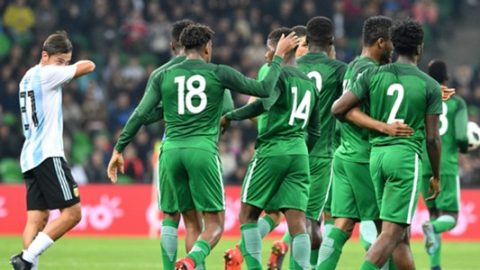 (AFRICAN EXAMINER) – President of the Nigeria Football Federation (NFF), Amaju Pinnick has said that the Super Eagles players stand the chance of pocketing 24 million dollars if they play in the final of the 2018 World Cup.

The News Agency of Nigeria (NAN) reports that the World Cup will hold from June 14 to July 15 in Russia.

Pinnick told newsmen in Abuja on Wednesday during a parley that the money was part of the agreement reached with the players to share 50-50, whatever would accrue to the country if they get to the final and lift the trophy.

“I don’t put players under pressure. Pressure can be put on them unconsciously because we are creating enabling environment for them.

“If for example we don’t have money to prepare them, they can now relax but now, we have given them everything upfront and they should deliver.

“If today they get to the final, the World Cup money will be shared 50-50 between the team and the NFF.

He also said that the adequate preparation including grade A friendly matches have been secured with England and Czech Republic to ensure the team do well at the World Cup.

The NFF boss further said that glass house had already secured 2.8 million dollars to pay the players allowances and bonuses during the mundial.

“We are ready to play against England on June 2 in London in an international friendly. We had a conclusive meeting with the England FA.

“After the England match, we will play Czech Republic and from there we move to Russia. As it is everything is going on very well.

“For the world cup, I don’t think we have any problem, I am in touch with the technical committee. It is the desire of every Nigerian to see the Super Eagles do well at the World Cup.

“We had a meeting with the team, we signed a contract with them and ready to pay them 20 per cent of eight million dollars which is what is accrued to us for the World Cup.

“At the end of the day it amounts to 2.8million dollars which will go to the players. The money is almost 100 per cent ready,” Pinnick added.

Pinnick also explained that the football house met with some state governors who were ready to assist the NFF financially to achieve the country’s World Cup dream.

He commended President Muhammadu Buhari for his support for the NFF and the Super Eagles, and assured that they would not let him down in Russia. (NAN)