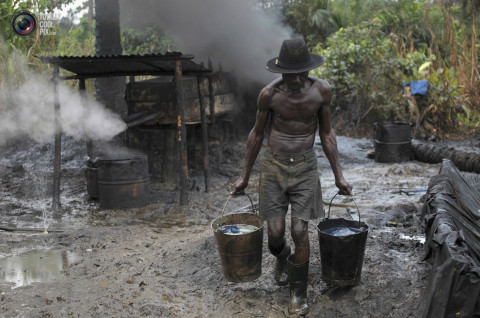 The Plateau State Command of the Nigeria Security and Civil Defence Corps (NSCDC) has arrest 5 persons for oil bunkering in Bassa LGA of Plateau State.

The suspects were arrested with 164 gericans of fuel.

Among the five persons arrested are two soldiers attached to the 3 Armored Division of the Nigeria Army Rukuba, in Bassa LGA.

Briefing journalists at the Command’s headquarters in Jos on Thursday, the Commandant of the NSCDC in the State, Vincent Bature said, “We got the information of their illegal dealings through a tip off from members of the community, which led to their arrest.

Bature added that, one of the suspects is still atlarge.

“Among them are two military men, serving under the 3 Armored Division of the Nigeria Army Rukuba, and they have been handed over to the appropriate department in the military to discipline them.

He assured that the two soldiers must be court marshal.

He advised the public to always give useful information to security agencies to aid them in arresting criminals.