Pledges Pour in For Reconstruction of Destroyed Paris Notre-Dame Cathedral 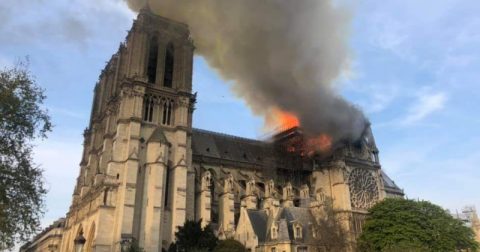 (AFRICAN EXAMINER) – Pledges to rebuild the French historic cathedral, Notre-Dame partially destroyed by a devastating fire have been pouring in droves.

French President Emmanuel Macron Tuesday vowed to reconstruct the building even as the fire still burned, while a number of companies and business tycoons have so far pledged about €600m ($677m; £519m) between them.

Offers of help with the reconstruction have also poured in from around the globe, with European Council (EU) President Donald Tusk calling on member states to rally round.

The fire declared fully extinguished some 15 hours after it began, ravaged the 850-year-old building’s roof and caused its spire to collapse.

However, firefighters who worked through the night managed to save the Paris landmark’s main stone structure, including its two towers.

The cause of the fire is still not yet clear.

Paris public prosecutor Rémy Heitz said his office was “favouring the theory of an accident” but had assigned 50 people to work on what he believed would be a “long” and “complex” investigation.

Other officials have suggested that it could be linked to extensive renovation works currently taking place inside the church.