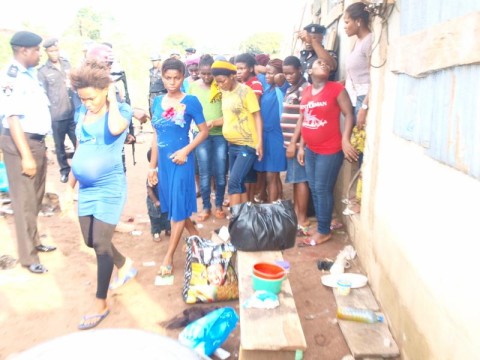 Less than three months the police in Imo uncovered a baby making factory in a community in Ehime Mbano, council area of the state, the security operatives Tuesday burst a similar outfit in Egbu, near Owerri. 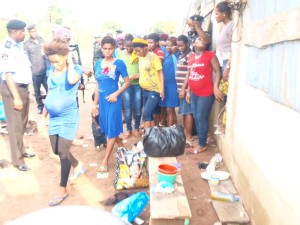 African Examiner recalled that police in the state, had sometime in September this year, arrested one Mrs. Cele Eze, a nurse by profession at Umuezeala- Ogwara community, in Ehime Mbano local government area of Imo state, for operating a similar illegal child fostering outfit.

The security agents, acting on a tip- off, had storm the Egbu baby making factory, where they arrested its proprietor, one Dr. James Ezuma, who also runs a Non-Governmental Organization (NGO), and the illegal clinic.

However, the police, had during the operation, rescued a total of 16 pregnant girls, including one whose two-hour old baby girl was sold without her knowledge.

The state Commissioner of Police, Mr. Mohammed, Kastina who led the Ambush Squad to the illegal clinic, located at No. 40 Egbu Road, beside Somachi Automobile Market, Owerri, was shocked with what he saw at the place.

On interrogation, it was discovered that Dr. Ezuma, who hails from Ndiokeke Ndiakunwanta in Arondizuogu, Ideato North LGA of Imo State, has operated the NGO, called Ezuma Women and Children Right Initiative for a long time.

The police had also rescued a three-year-old boy who was brought to the place alongside his pregnant mother.

Our Correspondent observed that the 16 pregnant girls who are below twenty years of age, were kept in two room apartment that had no windows while repulsive odour oozed out from their rooms.

Speaking with journalists after rescuing the victims, the commissioner of police said, Dr. Ezuma, “who has been very notorious for gun-running and trafficking of human beings, was eventually apprehended at his residence by the Command Ambush Squad on Tuesday 26th November, 2013 through credible intelligence.

He said after his arrest, “search was conducted in his premises purportedly registered as an office for an NGO, which turned out to be a baby factory, where teenage girls are encouraged to get pregnant and take home the sum of N100,000 at delivery, on the condition  that they would abandon their babies who would be eventually used for purposes ranging from child trafficking to rituals.”

The Imo state police boss, further hinted that the suspect was arraigned before an Owerri Chief Magistrate Court 1 on November 1, 2013, for the offence of conspiracy and unlawful possession of firearms.

According to him,” the pregnant girls rescued in the premises of Dr. Ezuma were aged between 14 and 19 years, and after further search was conducted, an automatic eight-loader pump action gun (which is prohibited) was found in his house.

Kastinna stated that of major concern to his command was the fact that on November 24, 2013, one of the pregnant girls, Nnachi Chinaza from Ebonyi State, gave birth to a baby girl, who was immediately snatched away by the said Dr. Ezuma and sold to an unknown person.

He said all efforts made by the police to find out the whereabout of the baby hit the rock, as according to him, the said suspect had bluntly refused to lead the police to where he kept or sold the baby.

Mr. katsina said the presumption at the moment was that the said baby might have been used for ritual purposes.

He therefore, warned the general public to endeavour to keep an eye on their girls so that they would not fall prey to such miscreants like Dr. Ezuma, who did not mean well for the society.

Speaking to newsmen one of the victims whose child was snatched from her, Miss Chinaza Nnachi, said she was directed to come to the place by an aunt after her boyfriend denied her pregnancy.

She said amidst tears, that though, she was given N100,000 after delivery, on the promise that they would train her baby,  she never knew her baby would be sold to unknown persons even without her consent.

Narrating her own story, an 18 year old Blessing Anyaike who came all the way from Lagos, told Reporters that she became stranded when she got pregnant, but was directed to the place with the promise that her child would be taken care of.

The suspect while speaking to journalists insisted that he was not into child trafficking, saying the children were only being given out for adoption on the consent of their mothers.

He said  the“missing child’ has been traced to Ozomagana street in Onitsha” saying social welfare office, in Aba and Twin sisters Motherless Babies’ home Aba, gave the last child out adding that the girls were admitted as pregnant women.

Recovered from him by the police were 10 exotic cars of different model amongst other items.