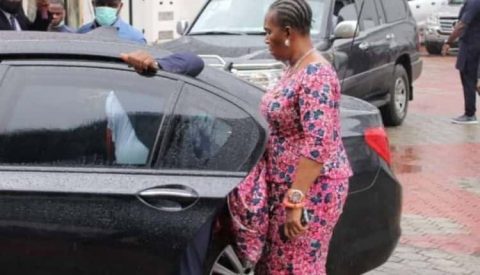 (AFRICAN EXAMINER) – The Rivers State Police Command has refuted claims that the armed operatives who attempted to arrest the former Managing Director of NDDC, Joi Nunieh, were not directed by the Inspector General of Police and the Commissioner of Police in Rivers State.

It will be recalled that Rivers State Governor, Nyesom Wike, had alleged that the officers could not show a warrant of arrest and the police hierarchy was not aware of their presence after he rescued her.

However, the Rivers Police Command in a statement released by SP Nnamdi Omoni, the Public Relations Officer, said the operatives were on legitimate duty.

Omoni stressed that the personnel at Nunieh’s residence were from the IGP Monitoring Team in Abuja and were in Port Harcourt on official assignment.

“The attention of the Rivers State Police Command has been drawn to an Online Publication, where it was erroneously reported that ‘the MOPOL presence at the residence of Joi Nunieh was not the directive of the Command.

“Ordinarily, such a phantom report should have been ignored but due to the potential danger inherent in keeping silent, the Command is minded to react and state the true position as follows: That they went to her (Nunieh’s) residence with Mobile Policemen, suggesting of course that they were there on official duty and not illegal duty as speculated.

“That, the reference indicating that the Officers were there without the directive of the CP nor the IGP is preposterous and most unfortunate, hence should be discountenanced and disregarded.”