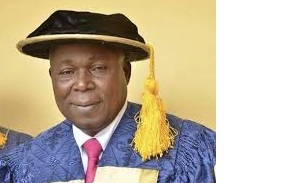 (AFRICAN EXAMINER) – Fasakin Emmanuel Adedayo is a professor of fisheries who specializes in fish nutrition and utilization. He is also the Chief Executive Officer of the young Federal Polytechnic, Ile-Oluji in Ondo State where he has ruled and reigned in an eventful first five-year tenure.

Although, his appointment was for a four year tenure billed to expire in March last year, he had the fortune of an additional one year extension courtesy the recently signed Polytechnic Act which prescribes 5-year tenure for chief executives of Polytechnics.

As a pioneer Rector, providence entrusted on his shoulder an onerous task of building something out of nothing. And expectedly, the assignment was daunting. The professor was expected to lay the foundation for not just academic excellence, but also for an enduring legacy of sound moral principles and character that would define the institution in a long time to come. The erudite scholar may have done just that.

But his critics are now saying those were mere expectations -some wishful thinking, if allegations of age falsification and financial impropriety levelled against him which is before the Independent Corrupt Practices and Other Related Offences Commission (ICPC) is anything to go by.

The petition dated 10th July, 2020 by Concerned Staff Members if FEDPOLEL detailed some damning accusations. Right now, there are allegations of age falsification hanging dangerously on the head of the former deputy vice chancellor of Federal University of Technology, Akure (FUTA) like the sword of damocles.

The petitioners expressed frustration, lamenting their inability to fight collectively as a body. They told ICPC in their letter that there is no freedom of association, whether of the academic staff, non-academic staff nor of students union which is forbidden. It urged the anti-graft agency to investigate all the allegations and make the Rector to account where found culpable.

A copy of the petition obtained by our reporter reveals obvious discrepancies of how two different official records of professor Fashakin reflect two different years of birth. His accusers say the motive was to enable him to elongate him tenure as Rector in FEDPOLEL.

“Prof. Fashakin E.A holds an ECOWAS passport no. A09374269 issued to him in May 2018 with birth date of 05 -03 -1958 valid till 21 -05 -2023.” This according to the petitioners, clearly conflict with the earlier record at FUTA.  To further reinforce its position, the petition also alleged that the professor submitted a document at the Malaysian Embassy for Visa application in 2018 with a birthday stated as 05 -03 -1958. It referenced his official publications at his current place of work as Rector where he was reported to have been born on 5th March, 1956.

The reason, going by the petition may not be unconnected with his quest for tenure elongation at the federal polytechnic where he is expected to be on his exit route.

Furthermore, tt is in concealment of the grievous anomalies, the petitioners alleged, that Prof. Fashakin, has now collected three different letters of renewal of appointment as a Rector but with none in his file.

According to the petition, it was curious that the professor later went to Abuja where he got three letters in succession on the renewal of tenure that Governing Board earlier denied him on the ground of obvious discrepancies in his official records. Not only was he granted tenure extension, it was multiple extension. ”

One for four years signed by the minister of education, the second, two years signed by the permanent secretary, Federal ministry of Education for two years, directing him to retire at the age of 65 years by 05-03-2021 and the third one came in January 2920 granting him a second term tenure terminating in 2023 when he would be 67 years old in a polytechnic sector.

The petition also accused Prof. Fasakin of financial impropriety. It questioned the award of contract to “Live Enterprises Nig. Ltd,” for the supply of one number Tata Vehicle for Survey and Engineering fieldworks at the sum of N13, 528,000.00 under the high impact Tetfund scheme. The Tata vehicle was later changed to “used Hilux vehicle”, perhaps with Tetfund approval. The petition, however, alleged that ” cash refund from the contractor meant for the polytechnic account ended in a private account instead.”

The Rector was also accused of impunity, as according to them, “Consultants are solely appointed by him without recourse to due process.” Most of his unnecessary foreign tours have been attracting reimbursement of about N700,000.00 outside the normal estacode for such trip. Another accusation was that the Rector commissioned capital project without completion, retention of contractors not being paid, approval of numerous DTA for driver for unofficial trips. Other allegations include; hosting contractors in his private home, staying in official quarter and still get full benefit of accommodation.

The petitioner wrote the ICPC that the National Board on Technical Education (NBTE), the body statutorily saddled with power to control polytechnics, “is handicapped and cannot control him because of the support he gets from the director tertiary at NBTE, deputy director polytechnic and the Secretary to the Honourable Minister of Education,” it further alleged.

Professor Fasakin, when contacted by African Examiner dismissed the allegations as witch-hunt by those who do not want him to continue his second term tenure.

He said that the mix up in his age was not deliberate. Fasakin maintained he was born on 5th March, 1956 “and that the details of his academic progression are contained in his curriculum vitae.

According to him, he was born into a family of uneducated parents who kept no known records. “So, like most people with similar circumstances of my parentage, I had initially relied on mere conjecture to arrive at 1958 as being my year of birth. That was the situation as at the time of my appointment at The Federal University of Technology, Akure. Most of my documents, including my international passport which first issue was obtained in 2003 when I first travelled abroad in the course of my official duties, bear that age.

“However, as I progressed in life, I realized that the year of birth I had been using could be wrong, especially when I compared my age with those of people I had grown up with and whom I had always associated with as contemporaries. I therefore undertook more inquiries from home and came to the reality that my date of birth was more probable 5th March, 1956 than 5th March, 1958. This prompted me to depose to an affidavit for declaration of age in a competent Federal High Court in 2011, long before I was appointed the Rector of the Federal Polytechnic, Ile Oluji. Following my appointment as Rector, Federal Polytechnic, Ile Oluji, I entered 5th March 1956 as my date of birth at the point of documentation, and that has remained the only one I have been using till date,” Fasakin said.

He said it was not true that he joggled his date of birth to unlawfully stay in office for two more years. “What they had not reckoned was that I had not only reverted to the use of my real age, doing so implies that I would be exiting the public service two years earlier than I would have, if I had retained 1958. In this part of the world, the need to unlawfully benefit from the system often informs why people alter their dates of birth. In my case, it is obvious that the alteration has been in good faith and good conscience rather than any subterranean purpose.”

And I have since then stuck to 5th March, 1956 as my date of birth in all my records, whether official or unofficial. Even when the Governing Council of the Polytechnic was interacting with me while considering my appointment for second term as Rector of the Polytechnic, I stuck to 1956 as my authentic year of birth, in spite of the seeming ‘advantage’. I may quickly add that I obtained my International Passport before I arrived at my real date of birth. However, the process involved in changing dates of birth on such documents is cumbersome in our clime. More so, most of my trips outside the country have been at short notice. This is why my date of birth on my passport and visa continues to read 1958.”

Also, the Rector dismissed accusation of poor performance. He said his re-appointment as the Rector was premised on his sterling performance, relationship with staff and students of the institution, and the superlative town and gown relationship he was able to facilitate during his first term in office.

“It has nothing to do with my age. As a University Professor, my career is governed by the conditions of service in the university sector which guarantee my active employment till seventy years of age unlike organic staff of Polytechnics whose active employment age is sixty five years as laid out in the conditions of service for Polytechnics. The decision on my re-appointment was taken by the Council whose prerogative it is to recommend a Chief Executive to the Visitor, and who appropriately recommended my re-appointment to the visitor of the institution, the President of the Federation, His Excellency, President Muhammed Buhari, GCFR. The President approved my re-appointment for another term of four years in December, 2018, a clear attestation to the confidence His Excellency reposes in my leadership and capacity in piloting the affairs of the institution.

The Rector also denied ever single handedly awarding any contract. it is “baseless, the allegation that I divert public fund to my personal account or take kickbacks from contractors cannot hold water in the face of the realities on the ground.

On the controversial purchased Hilux vehicle, the Rector explained: Initially, a TATA vehicle was recommended to TETFUND for field trip at the cost of N13,528,000.00 only. The contractor to whom the contract was awarded later complained that a TATA vehicle of the specifications recommended was not available in the market and that, in any case, a TATA vehicle was not strong enough for field work. Recommendation was made by the Tenders Board of the institution to TETFUND, the funding agency and, in its wisdom, the agency approved the Hilux vehicle at the cost earlier approved for TATA vide PETF/DPI/DEY/ILE OLUJI/SHIP/2017/Vol. III dated 3rd of December, 2019.”

According to him, “the procedures for operating the funds provided by TETFUND give no room for diversion of fund into the account of any individual.”

On official trips outside the country, “they alleged that most of (my) unnecessary foreign trips have been attracting reimbursement of about N700,000.00 after collecting normal estacode for the trip”. To this the Rector said he had so far travelled outside the country for official engagements only five times within almost six years in office, “the disbursement of funds for all trips has always been in compliance with the relevant provisions of the Financial Regulations and Establishment circulars,” he argued.

On the alleged commissioning of uncompleted projects. Again the Rector dismissed the claim as “spurious and baseless falsehood. I affirm that all projects commissioned in the Polytechnic were thoroughly executed.

The standard practice in the Polytechnic is that a contractor must first hand over a completed project to the Management, after due certification of completion, before such is commissioned. Following this standard procedure, the institution has only commissioned projects once, and that was during its maiden convocation on 28th November, 2019,” he said.

He added that he never stayed in the official quarters and still got full benefits of accommodation, “The Polytechnic has no official quarters as at now. The only building designated as the Rector’s Lodge was donated to the Institution by the Ile- Oluji Community at inception and was later renovated to accommodate the Rector and other Polytechnic’s guests from time to time.”