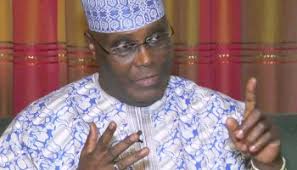 (AFRICAN EXAMINER) – Prominent Igbo leaders have condemned in its entirety the endorsement of the presidential candidate of the People’s Democratic Party, PDP, Alhaji Atiku Abubakar by the Chief Nnia Nwodo led Ohanaeze Ndigbo describing it as charade.

The Nigeria’s ex – vice president, was endorsed on Thursday during the Imeobi (caucus) meeting of Ohanaeze, which took place at the Nike Lake Resort, Enugu.

However, the development has sparked off ill-feelings among other Igbo leaders, especially members of the All Progressives Congress, prompting a media briefing late Thursday night.

Atiku was endorsed same day Buhari had visited Anambra and Enugu States, where he commissioned some projects embarked upon and completed by his administration

Apart from their claims that over 90 percent of the members of Imeobi were not at the meeting, they equally posited that the power to carry out such endorsement was vested upon the Ohanaeze General Assembly and not the Imeobi.

The Igbo leaders equally said the meeting was a mischief, having held same time President Buhari was still attending functions in Igbo land.

Ngige said that the President-General of Ohanaeze, Chief John Nnia Nwodo had earlier agreed to move the meeting till 7 p.m, wondering why it was later held by 4 p.m and a decision hurriedly taken.

He said “myself and the Chairman of the Southeast Governors’ Forum had approached the Ohanaeze President and pleaded with him to change the date. He said he cannot do that; he later gave me 4 p.m, but I told him it was not going to work.

“By 5 p.m, they met and issued an already prepared communique.

“All of them that met are Ohanaeze PDP. So, it is now Ohanaeze PDP vs Ohanaeze APC. They have factionalized Ohanaeze.

“We are going to dig up our arsenal and all we need to fight this,” he vowed.

On his part, the foreign minister, Onyeama said the development was that would have consequences for years to come.

Acoording to him, “Mr. President was visiting two Igbo States, where he commissioned projects, including the Mausoleum of the great Zik of Africa. So, it was inappropriate to have a meeting of Ohanaeze to discuss such a weighty issue on who to endorse. It was not the time to hold such meeting.

“I see this as a decision that will have consequences for years to come. This is not a decent decision for the Igbos.”

Minister of science technology, Dr. Ogbonnanya Onu on his part had lamented that he was rushing to attend the meeting only to be informed that it ended over an hour ago, even before the 7pm scheduled.

“There was no reason for the President-General of Ohanaeze to be informed of President Buhari’s visit and he still went ahead to hold that meeting. We must be inclusive in anything we do,” he noted.

“One of the things that Ohanaeze came up with is that our son, Peter Obi was picked as number 2 in PDP. It does not make reasonable sense because there are people of Igbo extraction angling to be number one, but those guys endorsed number two.

“On the restructuring they talked about, the APC as a party, which I belong, set up a committee and it endorsed restructuring. But let me say clearly that anybody that it telling you he will restructure, be it President, Senate President or the Chief Justice of Nigeria, no one person can restructure. It is just a fallacy. It needs the NASS, constitutional amendment involving the State Houses of Assembly too.

“So, those of us in APC find it totally repugnant. It is not in the interest of Igbos. Ohanaeze should not dabble into politics at all. If they want to register Ohanaeze as a political party, let them do so, after which those that are not interested will leave,” the ex-Senate President added.

Mr. Okechukwu, the VON DG, who moderated the meeting, re-echoed the views that the endorsement does not stand, as it lacked any form of legality.

In their separate comments, Okolagu and Ozobu also said it was null and void as Imeobi was not properly constituted, adding that the final power to carry out such function lied with the Ohanaeze General Assembly.

Meanwhile, the development has continued to attract sharp criticisms from Igbo sons and daughters who alleged that Chief Nwodo has turned the Igbo socio cultural body into a branch of the opposition PDP because of his selfish interest.