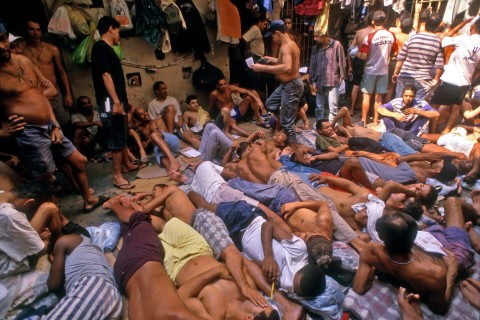 Italian photographer Giuseppe Bizzarri has captured the brutal pictures of life inside some of Brazil’s most notorious jail cells, where travelling fans will be sent if they get involved in violence during the FIFA World Cup which kicks off on Thursday.

Bizzarri was given rare access to Sao Paulo’s most infamous penitentiaries, describing the prisons as “crime universities”. 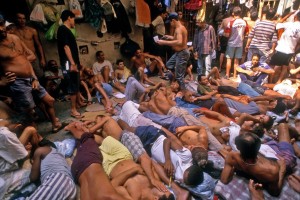 Photos reveal the horrific nature of life behind bars at the packed out prison cells, many of which are controlled by criminal organisations.

The photographer, who has lived in Brazil for 20 years, said: “Brazilian prisons are like a crime university.

“The main criminal organisations connected to traffic organise themselves and then send their plans to the individuals who are outside.

“I think everyone knows it’s awful the way they treat inmates.”

He added: “The UN already raised awareness to the prison conditions in Brazil.

“The biggest problem still is the overpopulation of prisons.

“One of the most transmitted diseases is tuberculosis which spreads rapidly because of the overpopulation.”

“These prisons really are brutal and no-one in their right mind would want to end up there.”

A prison riot in October 1992 led to military police storming the former Carandiru penitentiary, Sao Paulo, in what emerged to be one of the bloodiest massacres in Brazillian history.

More than 100 inmates died in the massacre, with 102 being gunned down by police and a further nine being killed by fellow inmates.

A further 15 policemen were sentenced to 48 years behind bars earlier this year for their part in the horrific massacre.