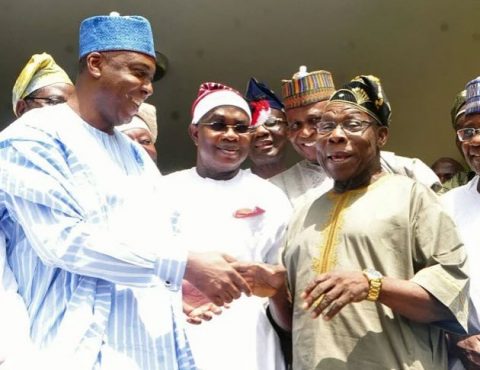 The meeting, which held behind closed doors lasted more than an hour and half.

Details of the meeting were not made available to journalists.

The Senate President who was wearing a white  Agbada with a white cap told journalists he was in Abeokuta to see Obasanjo because he missed the official opening of the multi -billion dollar project of the OOPL.

He described the Library as a beautiful edifice that all Nigerians should be proud of.

“You know I missed the official opening of the library and that is why I have decided to come and see the place and honestly it is beautiful. We are very proud of what he has done here,” he said.

Saraki left the library premises at about 7.12pm.

It was the second visit to a former Nigerian leader that Saraki has made in a week, following last Wednesday’s press conference, in which he accused the executive of sending DSS men to blockade the National Assembly.

The accusation  has been debunked and the head of the DSS then, Lawal Daura sacked for the unconstitutional action.

Last Wednesday, Saraki also visited former military leader, General Ibrahim Babangida in Minna, Niger State. He did not speak to journalists thereafter, but tweeted that: “Dropped in to pay my respects to General Ibrahim Badamasi Babangida. Always happy to be with a father and leader.” /(NAN)