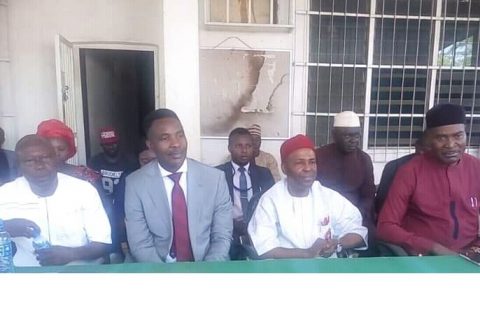 (AFRICAN EXAMINER) – Nigeria’s Minister of Science and Technology Dr. Ogbonnanya Onu, has urged members of the ruling All progressive APC, in Enugu state and South-East in general not to relent in their support for President Muhammadu Buhari and the party at all levels.

He said even though, members of the APC  in Enugu state have been undergoing tough time as opposition party, there is still hope for them, as he strongly believes that in the neatest future the party would  form governments of the respective states in the geo political zone.

Addressing members of the Enugu State Executive council (SEC) of the party at the state Secretariat in Enugu, the Minister, expressed appreciation to them, for the continued support they have been giving to the party and president Buhari, urging them not to relent.

The Minister, who had earlier commissioned a project at the Project Development institute  PRODA Enugu, before the visit to the Enugu APC office,  assured the party members in the state  that President Buhari have them in mind, and would continue to embark on human and oriented programme and policies.

He also used the forum to stress the need for unity in Enugu APC, adding that south east geopolitical zone of the country has brighter future in the party, hence the people must remain committed and united.

In a brief interview with newsmen, Enugu state chairman of the party, Dr. Ben Nwoye, had expressed appreciation to the minister for the visit, despite his very tight schedule ,  describing him as a true leader and man of the people.

The Enugu APC boss, stated that it is quite unfortunate that some people who got appointment because APC won election at the federal  level, have  decided to abandon the party faithful at the state level.

He said: ” This man came here all the way from Abuja, came in straight. He is not a minister from Enugu State, but he does not view himself as belonging to just Ebonyi.

According to the chairman, “he is a true Nigerian, he came in here, spent time with the party SEC members despite his very tight schedule and encouraged us. And because he has always supported us, Enugu State will always stand by Ogbonnaya Onu” Nwoye declared.

The state  APC Woman leader,  Mrs. Oby Nwofor, in her remarks,  called on the south east zonal vice chairman of APC, Chief Emma Enukwu, who was present during the visit to liaise  with the Minster and other top APC chieftains from the zone to wade into the crisis rocking the party in the state and south zone, nothing that the disunity in the  APC family in the area has done more harm than good to the members and party.