Sepp Blatter’s Fate Dangles; In Secret Talks Over Next Election 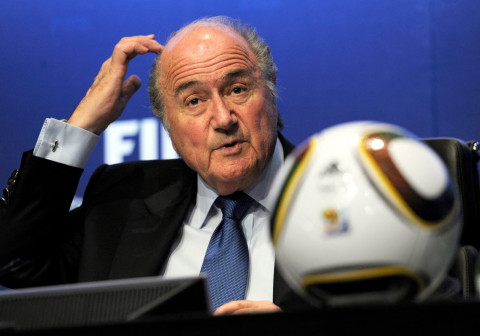 The fate of long serving President of the world Football Governing body FIFA, Sepp Blatter is unpredictable for now, as he and top officials of the body have engaged in secret talks with respect to continuity or otherwise of his tenure.

Already, Blatter has indicated interest to re-contest FIFA Presidential election in May 2015, making it his fifth shot, if he wins the incoming election.

The FIFA secret parley had in attendance, representatives from some football confederations, which have kick started since October 2013 and marking 150th anniversary of the English Football Association.

In the meantime, there is mounting concern among the FIFA executives, over the body’s future, especially its leadership, just as Blatter also faces challenge of meeting the Thursday, January 29, 2015 deadline, to declare his interest to re – contest.

Among the key issues calling for worries in the FIFA family, was the recent governing body tussle, which sparked off after the outcome of an investigation into alleged corruption that trailed World Cup bidding and which resulted to resignation of ethics committee investigator, Michael Garcia.

Garcia hinged his action on lack of independence, in the FIFA’s judicial processes as well as personal conviction that the world football body has been buckled down with a culture beyond reform.