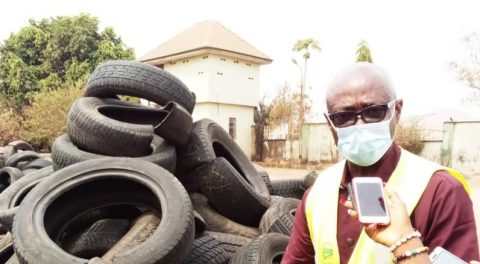 Supervising the destruction in Enugu, Mr Obinna Manafa, the Director, Inspectorate and Compliance Directorate of SON, said that the destruction was to prevent access of such tyres into the markets and homes.

Manafa explained that the products were intercepted and impounded by the Agency in Port Harcourt two weeks ago, following intelligence report about the warehouse where they were housed.

The director, who did not attach any monetary value to the expired and stuffed tyres, said that it runs into several millions of naira.

He said that Nigerians should know that the lifespan of every tyre is four years.

“However, these tyres we are destroying today, which is locally called “tokunbo tyres’ have been used several years overseas.

“Before they are imported in the country, they have stayed beyond four years already.

“The third issue wrong with these ‘tokunbo’ tyres is that they are forcefully stuffed inside each other, and at times, you might have six tyres stuffed together into one tyre.

“Any tyre stuffed with another has already lost its balance on ground and internal wire alignment of such tyre has been disarrayed also,’’ he said.

The director said that stuffed and expired tyres were sometimes concealed to beat regulatory procedures, assuring that SON would not relent in its fight against fake and substandard goods.

According to him, the products failed the conformity and integrity tests.

“The decision to destroy them is to save lives and property of Nigerians, since these expired and stuffed tyres can burst at high speed on major highway and deny the user, if he or she is still alive, the value for his or her money,’’ he said.

Manafa advised Nigerians to look carefully at the expiry date of a tyre before buying as well as “alert SON officials if any new tyre looks suspicious’’.

He said that the destroyed tyres would not be burnt, but sold to rubber and plastic recycling companies to get some revenue for the Federal Government.

“It is better that way instead of it constituting environmental hazard through burning,’’ he said.