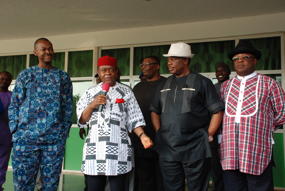 Briefing newsmen at the end of the meeting, Abia state Governor, and Chairman of the Forum, chief Theordor Orji, said they agreed on how they could jointly as governors, and chief security officers of their respective states in the region address the security issues in the zone and not tackling it on individual basis.

Present at the marathon meeting which lasted several hours, were Governors of Enugu,  State, Barrister Sullivan Chime, Theordor Orji, of Abia, Willy Obiano, of Anambra, Deputy Governor of Ebonyi, Dave Umeahi, while Rochas Okorocha was conspicuously absent and was not represented by anybody.

Governor Orji, further disclosed that they also used the opportunity to formally welcome the brand new governor of Anambra State, Dr. Willy  Obiano into their fold “and briefed him adequately”.

The south east Governor’s forum, told reporters that the meeting reviewed and discussed about delegates of the zone to the ongoing National Conference CONFAB in Abuja with a view to knowing how far they were faring.

His word: “The foremost thing we did was to welcome the new Governor of Anambra state into our fold and to brief him very very well.

“We discussed on security of our zone, how we can jointly tackle security in the zone.” Ori stated.

However, our correspondent gathered that the Governors resolve to table the security issue in the meeting, may not be unconnected with the recent security threat by the Barrister Benjamin Onwuka, led  Biafran Zionists Movement( BZM),  which claimed responsibility of the attacked on Enugu State Government House in the early hours of  8th of this month march.

The group had also threatened to storm other government houses in all the states of south east geo political zone, where they will hoist the flags of the defunct Republic of Biafra.

Apart from claiming responsibility of the Enugu attack, Onwuka warned that there would be bloodbath if  Nigeria failed to vacate the territory of the defunct Republic of Biafra come March 31, 2014.