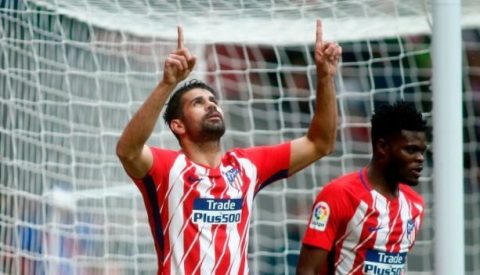 (AFRICAN EXAMINER) – Atletico Madrid striker Diego Costa haunted Arsenal again by firing his side to a 1-0 win in Thursday’s Europa League semi-final second leg to send the Spaniards into the final.

The result meant that Arsene Wenger was denied a dream end to his long reign as Arsenal coach.

Atletico won the tie 2-1 on aggregate and will meet either Salzburg or Olympique de Marseille in the final in Lyon on May 16.

Costa proved a handful for Arsenal when he played for Chelsea and the Spain striker broke the deadlock in a tight, tense game at the Wanda Metropolitano, striking in first-half stoppage-time after being played in by Antoine Griezmann.

Arsenal defender Laurent Koscielny was carried off on a stretcher early in the first half with a suspected torn Achilles tendon and they struggled to cope with Costa’s power and the flair of his attacking partner Griezmann.

Wenger’s side were blunt in attack against a typically determined and resilient Atletico defence and they only had one shot on target, a distance strike from Granit Xhaka which was not enough to beat goalkeeper Jan Oblak.

Atletico did not create many chances but they always looked in control and kept a remarkable 12th consecutive clean sheet in all competitions at their Wanda Metropolitano stadium to reach a fifth European final since 2010. (Reuters/NAN)