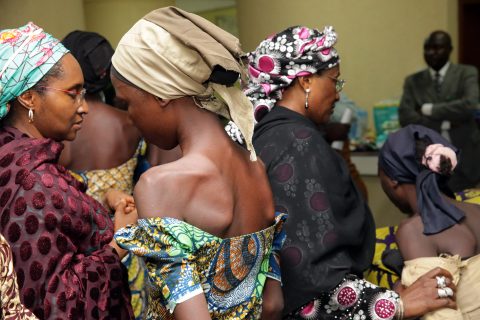 BALTIMORE, MD (AFRICAN EXAMINER) – The Defence Headquarters (DHQ) Saturday debunked the media report that there is disquiet in the Military hierarchy, due to purported swap of Boko Haram Commanders for the release of 21 abducted Chibok girls.

The military in a statement issued by Director of Defence Information, Lt. Gen. Abubakar Rabe, assured that the Armed Forces would continue to work closely with all her sister security agencies to achieve ‘’more feat in this direction’’.

‘’The military also want to debunk the baseless and unfounded story that there is disquiet in the military over the condition of release of the girls. The Nigerian Armed Forces and other security agencies are one, working together to finish the war on terror and other criminalities which can be done covertly or overtly. The most important thing is achieving our strategic objective. The DHQ has said before that negotiation with the terrorists or any other group rests purely on our respected political leaders. The military operations to rid our land of terrorists continue’’ Defence reiterated.

The Military indicated that it was important to state that not all information were meant for public consumption due to processes which is purely political, adding that the ongoing military operation was making unprecedented progress with rescue of many captives held by the terrorists.

While urging the public to discountenance the story, Defence disclosed that the Armed Forces holds the media veritable partner, therefore urged it ’’to be mindful and clarify with the military when reporting security and defence issues bothering on sensitive national matters of this nature’’.

Speculations of swapping the arrested terrorists’ leaders with freed Chibok girls have raged since Thursday, when the release of the latest 21 girls was made public.

It would be recalled the Minister of Information and Culture Alhaji Lai Mohammed Thursday in Abuja, at a world press conference, declared that the freedom has nothing to do with swapping.